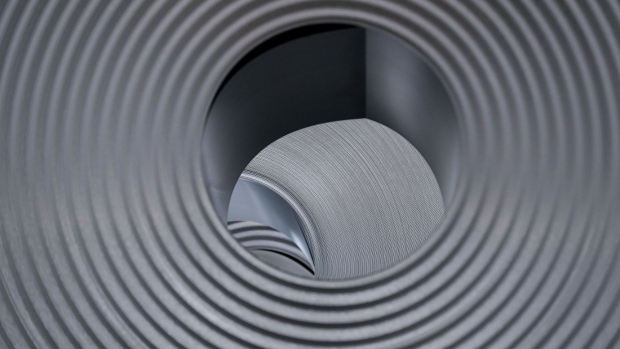 Rolls of steel sit in storage ahead of shipping from the Salzgitter AG plant in Salzgitter, Germany, on Tuesday, March 5, 2019. Iron ore may rally to $100 a ton as a supply crunch hits the market in the middle of the year, according to Citigroup Inc., which drew a comparison with a similar shock for the oil market to reinforce its point that investors haven’t yet priced in risks for the steelmaking raw material. Photographer: Krisztian Bocsi/Bloomberg , Bloomberg

(Bloomberg) -- H2 Green Steel is in talks to raise money from investors that could value the Swedish startup at more than 2 billion euros ($2.3 billion), according to people familiar with the matter.

The company, whose backers include Mercedes-Benz AG and Spotify Technology SA co-founder Daniel Ek, is working with advisers on raising more than 1 billion euros, the people said, asking not to be identified discussing confidential information.

Stockholm-based H2 is one of a new breed of steelmakers seeking to overhaul the way the alloy is manufactured as global industries lurch toward a low-carbon future. It plans to begin fossil-free steel production from a plant in Boden, northern Sweden, in 2024, with annual capacity expected to hit 5 million tons by 2030.

But the operating costs associated with cleaner steel production are much higher than with traditional methods and H2 is seeking total financing of about 2.5 billion euros for the first phase of its project. It raised $105 million from investors in an initial funding round in May.

Luxury carmaker Mercedes-Benz said it plans to use H2’s steel in its vehicles from 2025 onwards, with its German rival BMW AG making the same pledge this month. Carmakers could take part in the latest funding round, according to the people.

Deliberations are ongoing and no final decisions of the value and timing of any fundraising have been made, the people said. A representative for H2 declined to comment.

Steel is one of the essential materials of the modern age and also one of the dirtiest to produce, with the industry blamed for about 7% of global carbon emissions. Its biggest producers still rely on old manufacturing processes, using coal-powered blast furnaces at temperatures of 1,500 degrees celsius.

To clean up, European steelmakers are turning to hydrogen as a replacement fuel. Thyssenkrupp AG is working on a project to convert its steel mills to hydrogen production, while Sweden’s SSAB AB has already struck green steel partnerships with Volvo Group, Mercedes-Benz and Finland’s Cargotec Oyj.