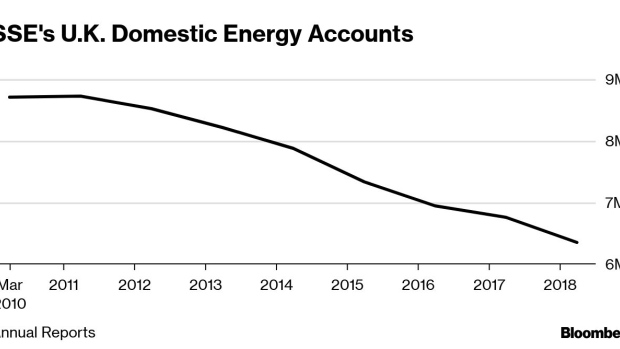 (Bloomberg) -- Ovo Energy Ltd.’s deal to buy the battered retail unit of Scottish utility SSE Plc will catapult it to one of the largest energy suppliers in the U.K. and disrupt the traditional group of ‘Big Six,’ which has dominated the market for almost two decades.

Ovo, a 10-year-old startup that has differentiated itself by offering green power and better customer service than its peers, has about 5% market share of all electricity supplied in the U.K.. After the 500-million pound ($622 million) accord announced on Friday, it will now become the biggest provider of power in the country behind Centrica Plc.

Stephen Fitzpatrick, Ovo’s 41-year-old founder and chief executive officer, said that ever since a deal between SSE and Innogy SE-owned Npower collapsed late in 2018, that SSE’s reputation for customer service and some of their technology was a good fit for Ovo. News of their discussions broke earlier in the summer.

“You can’t make much money from supplying energy unless you have economies of scale of a top three retailer,” said Elchin Mammadov, a Bloomberg Intelligence analyst in London. “The margins are small, competition is high and there is always a risk of a negative regulatory intervention.”

The deal should please the U.K. government, which has tried to boost competition for the biggest players. That’s led to a market flooded by small and medium-sized suppliers offering cheaper and more flexible tariffs for energy unencumbered by the big corporations that the biggest suppliers sit in.

According to Cornwall Insight, an industry consultant, Ovo had a 4.8% market share in the first quarter, while SSE had 10% of the nation’s dual fuel accounts.

“I don’t think scale is a good indicator of how I would define the company,” Fitzpatrick said by phone. “We started out as a customer-centric retail energy business and really nothing has changed.”

Technology and how it manages vast amounts of data has enabled Ovo to grow, including the advent of smart meters. Suppliers have gone from having one meter reading a year to one every 30 minutes, he said. The company says it was the first main supplier to not use coal or nuclear in its fuel mix. It guarantees 33% renewable energy in its standard tariff.

“Advances in technology, the falling cost of renewable energy and battery storage, the explosion of data and the urgent need to decarbonize are completely transforming the global energy system,” Fitzpatrick said.

The company says it has grown its customer base by 50% in the last 12 months, serving about 1.5 million customers before the deal.

Earlier this year, Mitsubishi Corp. invested in Ovo in exchange for a 20% stake to help it grow further. It’s expanding to France and Spain, with plans to move into the Australian and German markets after that. He declined to comment on whether he has any plans for an initial public offering.

“We are very busy on working on helping customers reach a carbon zero future and our size isn’t going to change that,” Fitzpatrick said.

The entrepreneur has also set up an electric aircraft company and heads up Kaluza, an intelligent platform used by electric vehicles and batteries to increase energy flexibility.

To contact the editors responsible for this story: Reed Landberg at landberg@bloomberg.net, Lars Paulsson, Rob Verdonck