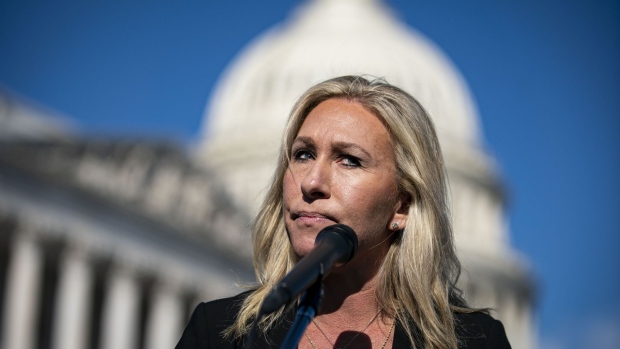 (Bloomberg) -- Marjorie Taylor Greene, the Republican congresswoman from Georgia known for espousing debunked conspiracy theories, plans to appear this month at the Iowa State Fair, according to people familiar with her plans. The gathering is a traditional platform for White House aspirants.

It’s not yet clear whether Greene will speak at the event on Aug. 19 or just attend it. The Des Moines Register this year isn’t planning to organize a Soap Box, which politicians in the past have used to raise their profiles for a national campaign.

Greene, a staunch supporter of former President Donald Trump, has rankled Democrats and some Republicans in Congress by promoting fringe theories, such as one that the so-called “deep state” was trying to depose Trump and that President Joe Biden’s electoral victory was fraudulent.

She has been touring the country to raise money with Representative Matt Gaetz, a Florida Republican, who is currently under investigation for possibly violating sex trafficking laws. Gaetz has denied any wrongdoing.

Some Republicans have already discussed plans to distance themselves from Greene at the fair in Iowa, according to two of the people familiar with the conversations who spoke on condition of anonymity.

Greene didn’t immediately respond to a request for comment.