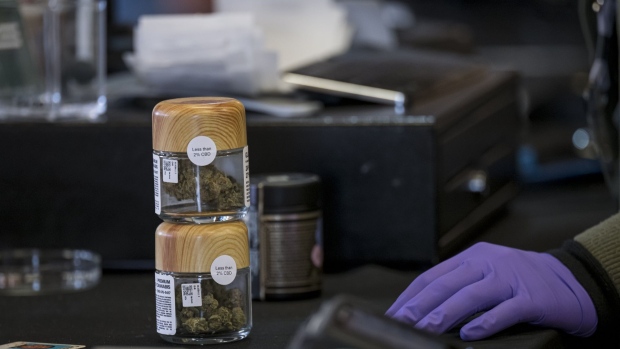 Jars of cannabis sit on a counter at the Harborside dispensary in Oakland, California, U.S., on Monday, March 23, 2020. California's shelter-in-place order vastly expands mandates put in place across the San Francisco Bay Area. It allows people in the most populous U.S. state to leave their homes for needed items like groceries and medicine, while otherwise requiring that they limit their social interactions. Photographer: David Paul Morris/Bloomberg , Bloomberg

(Bloomberg) -- Greenlane Holdings Inc. and KushCo Holdings Inc., providers of cannabis industry packaging, accessories and services, are merging in an all-stock transaction that coincides with a push to extend legalization in the U.S.

The companies said Wednesday in a joint statement that Greenlane shareholders will own about 50.1% of the combined entity, which will have a market value of about $400 million. Neither company is what the industry dubs “plant touching,” or distributing the actual cannabis plant.

KushCo sells cannabis-related packaging such as empty vape cartridges and child-proof caps, which are primarily bought by multistate operators and other cannabis companies. Greenlane, which has a small packaging business, also sells water pipes, rolling papers and other cannabis accessories, including via direct-to-consumer channels.

The transaction comes as the state of New York plans to legalize adult-use marijuana, a move that could open up a $5 billion market opportunity, according to Stifel. New Mexico lawmakers are exploring legalizing the sale of cannabis to adults for recreational use. There’s also an expectation that, with Democrats in control of Congress, the U.S. could make federal moves on cannabis.

“We think this deal makes a lot of sense for a lot of reasons but factoring in the macro tailwind it makes even more sense to do it,” said KushCo Chairman and Chief Executive Officer Nick Kovacevich, who will be CEO of the combined company. “When the federal legalization hits, it’s going to be about who has the scale and revenue to seize those opportunities.”

The merged company, which will continue to trade publicly in New York as Greenlane, is expected to report $310 million to $330 million in pro forma revenue for this year, Kovacevich said in an interview.

The stock deal will conserve cash for growth opportunities, Kovacevich said. KushCo’s stockholders will receive about a quarter of a Greenlane share for each of their shares. The ratio represents a 7.2% premium to KushCo’s weighted average volume for the 20 days ended Monday.

“We definitely maintain a very robust pipeline of future M&A transactions,” said Greenlane’s current chairman and CEO, Aaron LoCascio, who will be president of the merged company. “We’re actively gauging a number of other transactions currently.”

The merger is expected to close in the late second quarter to early third quarter.

Dealmaking, including the rise of SPACs, has been heating up in the growing cannabis sector this year. Jazz Pharmaceuticals Plc agreed to acquire GW Pharmaceuticals Plc, maker of the first drug derived from the cannabis plant to win approval in the U.S., for $7.2 billion in cash and stock.

Curaleaf Holdings Inc. said this month it would buy Emmac Life Sciences Ltd. for about $285 million, giving the company entry into Europe’s rapidly growing cannabis market. Consolidation is happening in cannabis services, cannabis tech and at the cannabis producers themselves, including the merger of Tilray Inc. and Aphria Inc. announced late last year.