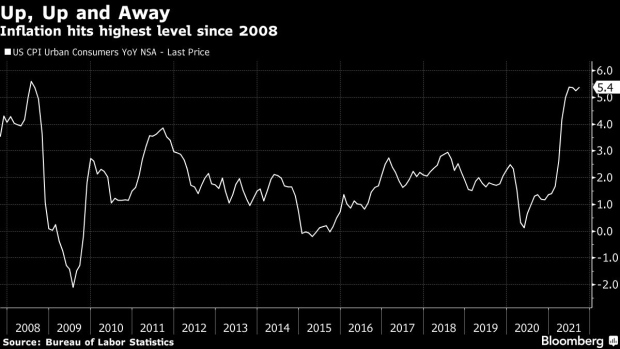 Alan Greenspan, former chairman of the Federal Reserve System, speaks during a Bloomberg Television interview in Washington, D.C., U.S., on Wednesday, July 24, 2019. Greenspan endorsed the idea that the U.S. central bank should be open to an insurance interest-rate cut, to counter risks to the economic outlook, even if the probability of the worst happening was relatively low. , Bloomberg

While some of the forces pushing up prices are likely to prove transitory, rising government debt and other underlying pressures could keep inflation elevated on a longer-term basis, he said.

“The tendency toward inflation remains, unfortunately, well above the average of about 2% over the past two decades,” he wrote in a note released Monday by Advisors Capital Management.

Greenspan, who is a senior economic adviser to the Capital Management group, said the Fed may need to rein in its support for the economy if further fiscal stimulus fuels demand. The central bank has a 2% average inflation target.

President Joe Biden is in the midst of protracted negotiations with Congressional Democrats with the aim of reaching agreement soon on a roughly $2 trillion social spending package over 10 years.

Fed policy makers, who have described the recent rise in inflation as largely transitory, are widely expected to announce plans to begin scaling back their $120-billion-per-month in bond purchases following their meeting next week.