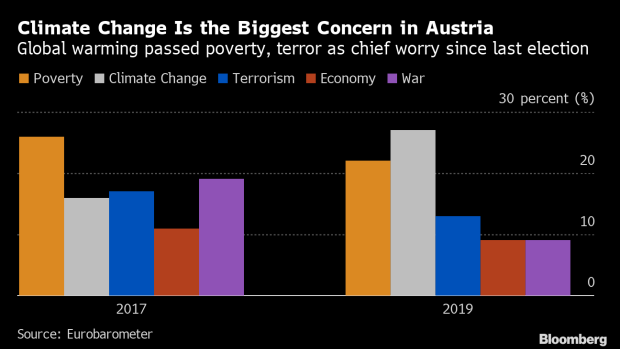 (Bloomberg) -- Two days after rallying 7 million protesters across the world by invoking the threat of climate change, Greta Thunberg got credit for motivating voters to redraw the political landscape in Austria.

After being frozen out of parliament just two years ago, the Alpine country’s Greens unexpectedly tripled their support in Sunday’s election to win 14% of the vote, according to preliminary projections. The result sets up the group as a viable coalition partner for Sebastian Kurz’s People’s Party and shows how environmental concerns are moving to the top of the political agenda in Europe.

“The thematic development really helped the Greens, I’m thinking here of Greta Thunberg and the climate protests,” said the Social Democrat’s Managing Director Thomas Drozda in an ORF television interview conceding defeat. “This is an area where the Greens have had credibility for the last 20 or 25 years.”

Amid record summer heat waves, funerals for lost glaciers and dying forests, climate change is starting to change European Union politics at the highest levels. German Chancellor Angela Merkel, the leader of the bloc’s economic engine, is losing popularity to the country’s Greens after being seen as too timid in protecting the environment. Incoming European Commission President Ursula von der Leyen has called keeping the planet healthy the bloc’s “most pressing challenge.”

In the two years since the 33-year-old Kurz won his last national election, global warming rose 11 percentage points to become the top concern in the minds of Austrians, according to the newest Eurobarometer data. That’s about the same increase in support Austria’s Green Party received on Sunday.

That turns what was a political fringe movement in the conservative country into a leading candidate for a role in government and could be a sign of things to come elsewhere in Europe. Kurz will be hard pressed to dismiss the Greens, even if there are significant differences especially on sensitive social issues such as migration.

The other options could be even more fraught. Joining up with the Social Democrats, which would mimic Merkel’s fragile “grand coalition,” would make a mockery of his promise of change. Like other center-left parties, the Social Democrats is in disarray and suffered their worst result in a national election since the country was created in the aftermath of World War I.

Renewing his vows with the far-right Freedom Party would mean relying on a volatile group that triggered the collapse of his last government and sustained damage to its reputation from the aftermath of the Ibiza scandal -- an undercover video that showed party officials currying favor with a fake Russian oligarch’s niece on the Spanish island.

Austria’s five parties agreed on a 540 million-euro ($591 million) package last week to promote renewable-energy investments. But while there’s broad consensus that climate change is real and that fixing it will require a retooled economy, the parties diverge in how they propose dealing with the problem.

The People’s Party has been promoting the development of hydrogen fuel in transport and heavy industry, while the Greens have sought to reduce the number of automobiles driving in cities and want to expand public transportation.

Bolstered by the growing momentum of the Fridays for Future protests, which has moved beyond school kids skipping classes, the Greens made it clear that their support won’t come cheap. Party chief Werner Kogler said he’s ready to negotiate with Kurz “as long as protecting the climate is at the center of politics.”

“Climate protection has arrived in the middle of society,” Green politician Birgit Hebein said in an interview on ORF, thank the protest movement started by Swedish activist Thunberg a year ago. “It is key that climate change is tackled on all levels.”

To contact the reporter on this story: Jonathan Tirone in Vienna at jtirone@bloomberg.net

To contact the editors responsible for this story: Reed Landberg at landberg@bloomberg.net, Chris Reiter