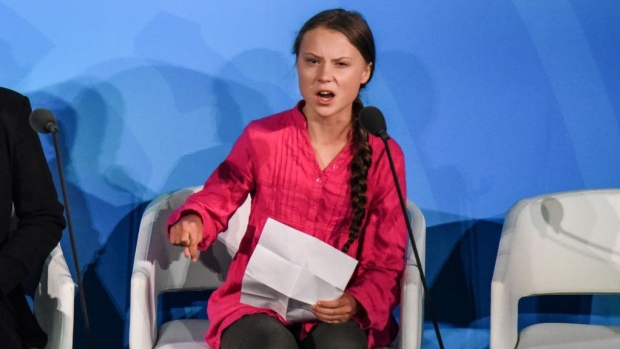 World leaders and chief executives of global corporations gathered at a United Nations summit on Monday to say that a 16-year-old climate activist from Sweden is right: They are failing.

Greta Thunberg -- the teenager who sparked a global youth movement to fight climate change -- arrived in New York on a zero-emissions sailboat, climbed the stage at the UN and told a crowd of more than 300 presidents, prime ministers, CEOs, bankers and delegates that they’ve let down her entire generation by not acting on climate change. “You have stolen my dreams and my childhood with your empty words,” she said Monday. “How dare you!”

Nobody refuted her. Most agreed.

“I want to echo the sentiments and the emotion of Greta -- that she could come here and condemn us all,” said Allen Michael Chastanet, prime minister of the Caribbean island nation of St. Lucia. “And deservedly so.”

It followed youth-led climate strikes that inspired millions to take to the streets on Friday and over the weekend in major cities from London to Paris to New York and kicked off a series of more than 150 climate-related events being held across Manhattan as part of a larger program known as Climate Week. In all, billions of dollars were pledged by governments and businesses to combat global warming, but few made commitments that went significantly beyond what they were already doing.

And the leaders of the world’s two biggest polluters -- the U.S. and China -- were noticeably absent from the speakers’ list.

“Not one single nation is getting the job done,” former U.S. Secretary of State John Kerry said during an opening ceremony of Climate Week. “It’s no wonder our kids are in the streets, screaming at us.”

Here are the highlights of Monday’s climate talks:

A Sense of Optimism

Guterres worked in the days leading up to the summit to instill a sense of urgency among heads of state. He warned that the world faces “at least 3 degrees Celsius of global heating by the end of the century.” And while he won’t be there to see it, he said, “My granddaughters will. And your grandchildren, too. I refuse to be an accomplice in the destruction of their home and only home.”

Despite the dire warning, several world leaders stressed that it’s not too late. Climate change is a serious problem, they said, but there are solutions. “We are still in time -- let us not allow that window to close,” Pope Francis said in a video address that was broadcast at the summit.

Trump made an unexpected appearance at the UN, along with Vice President Mike Pence, Secretary of State Mike Pompeo and Mick Mulvaney, acting chief of staff. Trump only stayed for about 15 minutes, and wasn’t in the audience for Thunberg’s speech, but he did hear remarks by Modi and Merkel.

The president on Sunday denied that he intended to snub the climate event, pointing to a briefing he received on flooding in the Houston area as evidence he is concerned about climate change. “It’s not a snub at all. I’m very busy,” Trump said as he departed the White House. “The floods are very important to me, and uh, climate change -- everything is very important.”

His appearance didn’t keep the critics away. Trump’s climate change policies, mostly notably his efforts to roll back environmental policies and his 2017 decision to pull the U.S. out of the global Paris climate agreement, came under attack several times.“I don’t know what the hell happened to our country that we have the president that we have in this issue,” California Governor Gavin Newsom said during the Climate Week opening ceremony. “I’m absolutely humiliated.”

China’s Foreign Minister Wang Yi said the world will continue to battle climate change without the U.S. While Wang didn’t call out Trump by name at the UN summit, he said the “withdrawal of certain parties” from the global climate agreement “will not shake the collective will of the international community, nor will it reverse the historical trend of international cooperation.”

Jay Inslee, governor of Washington, noted that “not a single county has followed Donald Trump off the cliff of climate denial.”

Speaking of which: After three and half years of foot-dragging, Russia President Vladimir Putin decided to ratify the Paris pact. The reasons have less to do with the fate of the planet than with geopolitics and gross domestic product, but it was welcome news at the summit on Monday.

Macron called the ratification a “pleasant surprise” and said it wasn’t expected.

While heads of state took turns making promises at the UN podium, climate strikes continued in the streets of Washington. Activists blocked traffic by shackling themselves to a pink-and-yellow sailboat on a trailer, featuring the phrases “Tell the Truth” and “Rebel for Life” painted on the side.

Germany pledged to provide $4.4 billion (4 billion Euros) to help developing nations cope with the effects of climate change. That’s double the amount of a previous commitment. “This is a global challenge that can only be tackled together,” Merkel said. While Merkel said industrial nations are to blame for climate change, she was one of the few leaders of major industrial nations to actually speak at the summit.

U.K. Prime Minister Boris Johnson said the country will double its own climate change aid to developing countries to $14.4 billion (11.6 billion pounds) over five years, up from a previous commitment of at least $7.2 billion.

Thunberg and 15 other youth activists filed a legal complaint with the UN on Monday, accusing France, Germany, Brazil, Argentina and Turkey of not doing enough to combat climate change. The suit asserts that the countries have known about the risks of climate change for decades but aren’t curbing emissions and continue to promote fossil fuels.

Corporations have issued dozens of pledges in connection with Climate Week, promising to do everything from buy renewable energy, to purchase cleaner fleets to become carbon neutral. Amazon.com Inc. said it’s ordering 100,000 electric delivery vehicles as part of a plan to go carbon-neutral by 2040. Alphabet Inc.’s Google announced the largest-ever purchase of renewable energy for a corporation. And Schneider Electric SE, a global supplier of electrical equipment, is moving up its goal to become carbon neutral by 2025, five years ahead of schedule.

A group of 13 oil and natural gas companies including BP Plc, Chevron Corp. and Exxon Mobil Corp. announced an initiative to “unlock large-scale investment” in technology that would capture and trap greenhouse gases.

In all, Guterres said 77 countries committed to reaching to net zero-carbon emissions by 2050. Almost as many committed to bigger contributions for climate change efforts. For some, it wasn’t enough. “While countries were expected to come to the Summit to announce that they would enhance their climate ambition, most of the major economies fell woefully short,”said Andrew Steer, president of the World Resources Institute.

Guterres called it progress, but acknowledged that “We need more concrete plans, more ambition from more countries and more businesses.” And, he said, “We need all financial institutions to choose, once and for all, the green economy.”