Our phones are ringing off the hook amid Ontario reopening: Bushwood Golf Club owner

Americans stuck at home during the pandemic embraced grilling more than ever, leading to shortages across the country last year. While other Covid fads like bread-making are fading, manufacturers are banking on friends and families gathering around the grill this summer as social-distancing rules are lifted.

The maker of Weber grills just had the biggest production month in its 128-year history, with its U.S. plant running 24 hours a day. Clorox Co., the owner of the Kingsford charcoal brand, is setting shipment records across its grilling portfolio, while Newell Brands Inc. is adding new suppliers. Char-Broil said it wanted to get a “running head-start” by shipping to retailers as early as last fall, a departure from its usual grilling season prep.

“2021 is really off to as good a start as 2020 ended,” said Mark Davis, Char-Broil’s senior director of product management and innovation. “The experience from last year will only enhance what we see coming out of this year.”

Sales of grills and smokers in the U.S. soared 41 per cent to US$3.2 billion for the 12 months ending in March, according to data from NPD Group. The trends could lead to another gain this year, said Joe Derochowski, NPD’s home and home improvement industry adviser.

Whether manufacturers can handle the crush remains to be seen. On a conference call this week to discuss quarterly earnings, Home Depot Inc. warned there may be more bare shelves this year.

“Continued outdoor living has been very strong,” said Chief Operating Officer Ted Decker. “So if all of you are interested in things like grills and patio sets, those are going to be in shorter supply as we get into the spring because the demand is incredibly strong.”

Coming into 2020, the industry wasn’t anticipating a record year. Demand for grills had been growing only modestly.

But as the pandemic led to widespread lockdowns, Americans began investing more in their homes, including buying new appliances. The unexpected surge in demand led to production snags and shortages of many types of products. Propane prices climbed and tanks became harder to find. Even hot dogs were in short supply last Labor Day, while chicken shortages are arising this year amid a labor squeeze.

Newell Brands, the maker of Coleman grills, said its inventory levels ran low due to the uptick in barbecue demand, leading to shortages in some categories in the latter half of last year.

“We weren’t as prepared because we weren’t sure of the impact,” said Ravi Saligram, Newell’s chief executive officer. “I wouldn’t say we were totally flat-footed, but we were chasing demand.”

Companies are making sweeping changes this year to avoid missteps.

Newell, for instance, has secured commitments from existing partners to allocate additional capacity for its grills and is pushing to add new suppliers to meet higher demand. Weber-Stephen Products LLC has been running factories 24 hours a day, helping it churn out a record number of Weber grills at its U.S. plant in March, said CEO Chris Scherzinger.

As of early May, purchases of fuel, lighter fluid and other fire-starting products were up nearly across the board compared to a year ago, according to market data from Nielsen. 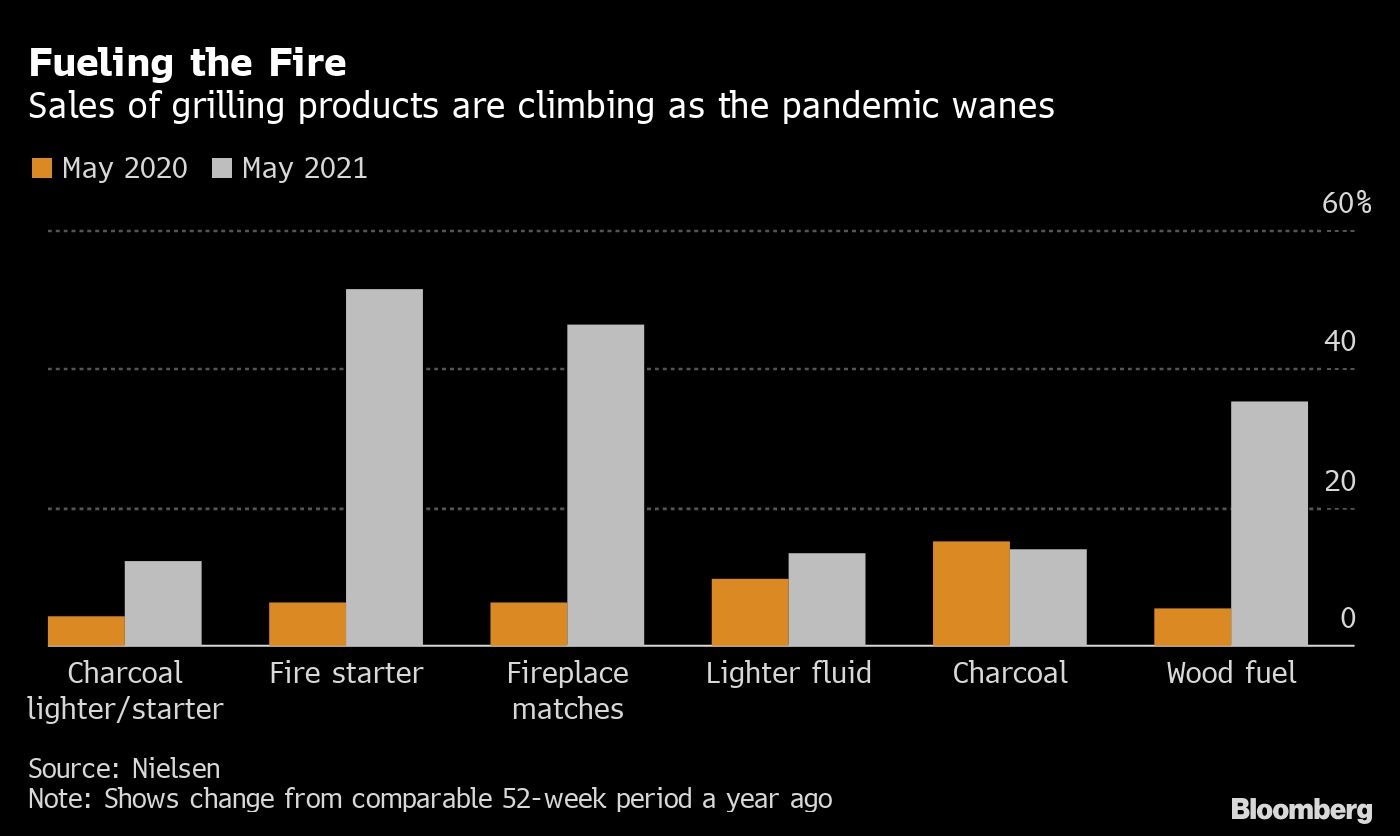 Still, another banner year for grill sales is far from guaranteed. Reopening economies will likely bring a resurgence in activities that have been put on the back-burner, like traveling and dining at restaurants. The industry also faces rising commodity prices — particularly steel and aluminum — as well as port congestion and container shortages.

For now, though, the industry is optimistic. Clorox sees grilling remaining popular even after the pandemic. The company, which is starting to see waning demand for wipes after an earlier pandemic-driven boom, has increased sales in the grilling category steadily since the pandemic began. It told investors last month that demand drove a record-setting quarter of shipments across its grilling portfolio, including charcoal, pellets and lighter fluid.

“We definitely want to be a part of what we see as a lasting behavior change,” Michelle Claudnic, the company’s director of research and development, said in an interview. “Even if you are not grilling now, you’re probably going to be soon.”