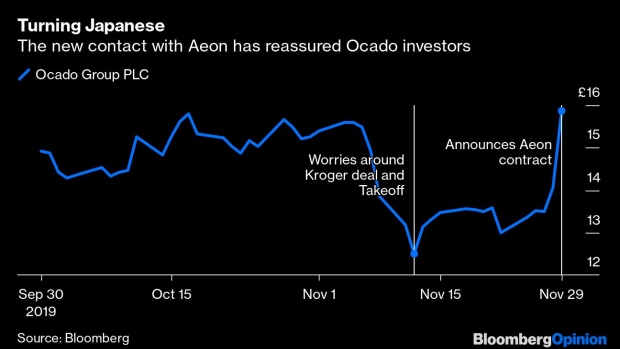 Ocado Group Plc’s new deal in Japan is appetizing, but it’s probably bitten off more than it can chew.

(Bloomberg Opinion) -- The online grocer that’s specialized in automating how orders are filled said on Friday that it will provide Aeon Co. with its technology, initially in the region around Tokyo. It hasn’t put a value on the deal, but Ocado expects the contract to cover sales of about 1.5 billion pounds ($1.9 billion) by 2025, rising to about 7 billion pounds by 2035.

To achieve that, analysts at Bernstein estimate that it will need to build about 20 automated warehouses, the same number envisaged in Ocado’s biggest deal to date with U.S. supermarket group Kroger Co.

It’s not surprising that Ocado Chief Executive Officer Tim Steiner has been tantalized by licensing the company’s software in Asia. Japan is the world’s fourth-biggest grocery market, according to industry researcher IGD. There’s also potential in other parts of Asia.

But Ocado already has a lot on its plate, not least the Kroger partnership, where success is crucial to enhancing its credibility with clients and investors alike.

The shares slumped earlier this month on concerns that its roll-out at one of the U.S.’s biggest traditional grocery retailers was progressing slower than expected. Ocado is also facing a new challenge from startup Takeoff Technologies. Like Ocado, which was started by three former Goldman Sachs bankers, its executives have Wall Street as well as grocery industry experience. But, rather than building giant state-of-the-art warehouses, it concentrates on making the process of picking groceries directly off of supermarket shelves for home delivery more efficient. This model has also been favored by Tesco Plc in the U.K.

Ocado sought to reassure investors recently that the relationship with Kroger was on track, announcing the sixth location for what in industry jargon is called a fulfillment center. But given the importance of this contract, the fact that the U.S. is still the world’s biggest grocery market and that the group had been chasing tie-up there for years, it would have been better to keep it as its priority.

When it comes to the capital available for investing in these big international partnerships, shareholders can take heart. Ocado’s sale earlier this year of a 50% stake in its U.K. online grocery business to Marks & Spencer Group Plc for up to 750 million pounds, boosted its coffers.

Ocado said it had 1 billion pounds of headroom. With each warehouse costing about 30 million pounds, it has scope to build 30. Even with all the recent contract wins, it doesn’t expect to have to build more than 30 distribution centers, so it should have enough capital for its current commitments.

Management bandwidth is another story. Next year, Ocado will be juggling the Kroger contract, getting Aeon off the ground and overseeing the transition to M&S becoming its grocery supplier in the U.K. That’s a lot to do. And let’s not forget its other contracts with Casino Guichard-Perrachon SA in France, Sobeys Inc. in Canada and Coles Group in Australia.

The Aeon contract will also require yet more developers to prepare the technology too. Ocado estimates it will need to take on an extra 400 people to get the job done.

Investors shrugged off any such concerns on Friday, with the shares rising as much as 15%. But Ocado has a history of unexpected items in its bagging area, from not having enough capacity in its warehouses to a fire at one of its robotic fulfillment centers in the U.K. earlier this year. Over-filling its delivery box increases the risk of more unpleasant surprises.