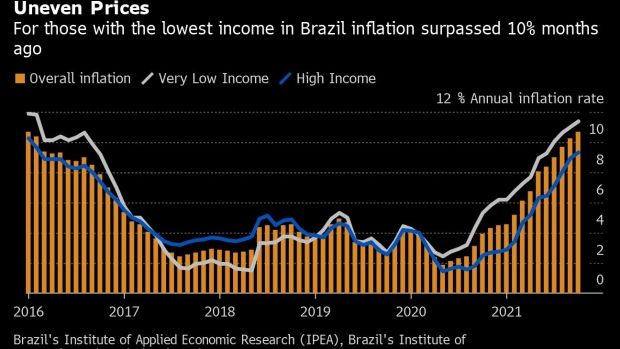 Members of the State Movement for the Homeless Population hand out food donations in Sao Paulo. , Photographer: Jonne Roriz/Bloomberg

(Bloomberg) -- Signs of the pain wrought by inflation are everywhere in the favelas that ring Brazil’s metropolises.

There’s the scavenged firewood replacing cooking gas in kitchens; and the fish heads and bones dropped into stews instead of beef and chicken; and the intricate alarm tags that grocers are wrapping around cuts of steak to discourage theft; and the wave of graffiti that’s emblazoned the word “hunger” in bold letters on building after building.

In the region that has become Exhibit A of the inflation surge rippling through the global economy, no country has suffered as intense an outbreak as Brazil. Consumer prices are climbing at an annual pace of more than 10%, up from as low as 1.9% in 2020. To make matters worse, the economy has slid back into recession just months after starting its tepid recovery from last year’s collapse.

This combo, known in economic circles as stagflation, is hitting the poorest Brazilians the hardest. Spikes in the cost of food, gas and electricity have driven annual inflation for low-income families to 11.4%, according to the Institute of Applied Economics, a state-backed research agency known as Ipea. The rate is much lower -- 9.3% -- for the wealthiest, underscoring a harsh truth: The pandemic has exacerbated inequality in Latin America and across much of the rest of the developing world.

For Rubia Alves, inflation has meant serving chocolate milk and bread to her two children for dinner. With cooking gas prices up 30% this year, preparing basic Brazilian dishes like rice and beans had become a luxury she couldn’t afford on the $200-a-month salary her husband earns as a doorman in Brasilia.

“I can’t spend two hours with the stove on,” Alves, 29, says from her small home in a slum on the outskirts of the capital city.

On average, Brazilians’ wages sank 4% after adjusting for inflation in the third quarter alone, government data shows. What’s more, only one in four children who receive assistance from the government’s public health system are eating three meals a day this year. In 2018, that number was 62%.

All of this spells trouble for President Jair Bolsonaro a year before he seeks re-election. With his popularity sinking, he has unveiled several programs to help working-class Brazilians against the advice of advisers who worry the moves will only further fan inflation. One social program will roughly double cash transfers to the poor. Another is subsidizing cooking gas.

Inflation is an old enemy here that policy makers thought they had tamed over the past three decades. But then came the pandemic, spurring global supply-chain disruptions and a surge in commodities that made items like food and fuel pricier across the globe.

Inflation Is Raging Everywhere, But It’s Worst in Latin America

In Brazil, the pain was compounded by a severe drought that increased the cost of producing energy and a slide in the currency, which further drove up the cost of imported goods. The central bank has aggressively raised interest rates this year, pushing them up 5.75 percentage points, in a bid to stabilize the real and quell inflation.

Last year, the Bolsonaro administration spent big to mitigate the effects of the pandemic, driving extreme poverty levels to a record 4.6% from about 11% in 2019, according to data from the Getulio Vargas Foundation. But once the emergency aid ran out early this year, poverty came roaring back. Today, the figure stands at 13%.

Marcos Barreto can see the toll it’s taking in the number of burn victims who show up at the public hospital he works at in Recife, a coastal city in northern Brazil.

One alternative to cooking gas that Recife residents have begun using is ethanol because, he says, it’s cheaper than coal, doesn’t leave a smell like gasoline and is easier to find in cities than firewood. But ethanol’s flame burns blue, which makes it hard to see and dangerous. Barreto is getting so many severe burn cases now -- about 50 a month -- that he often runs out of beds.

“People have turned to ethanol at a frenetic pace,” he says.

The growing gap between rich and poor is becoming starker by the day. A few weeks ago, a steak house in Brasilia popular with politicians and lobbyists announced a kobe beef festival. For 352 reais ($62) -- equal to about one-third the country’s monthly minimum wage -- VIP clients could feast on two pounds of the exclusive wagyu meat.

Some 10 miles away, Nilda Maria da Silva hasn’t had meat in months. The 65 year-old street vendor, who hawks socks, scarves and shirts out of her stand in a small city outside Brasilia, eats just one egg mixed with flour every day.

She says she’s concerned she soon won’t be able to afford even that. The eggs she buys are 28% more expensive than a year ago. And meat, flour, sugar and vegetables have all risen more than 10%.

The jump in meat prices has driven more people to Wallace Dionisio’s fish shop a few blocks down from da Silva’s stand. “Fish is cheaper than meat, so people are buying more fish,” Dionisio says.

Still, it’s not the expensive fillets -- salmon or trout -- that shoppers are buying. It’s the cheapest cuts, he says.

The last time Dionisio saw this type of demand for heads was during the 1990s, when he was a boy helping out his father in the shop and inflation was running above 1,000% a year.