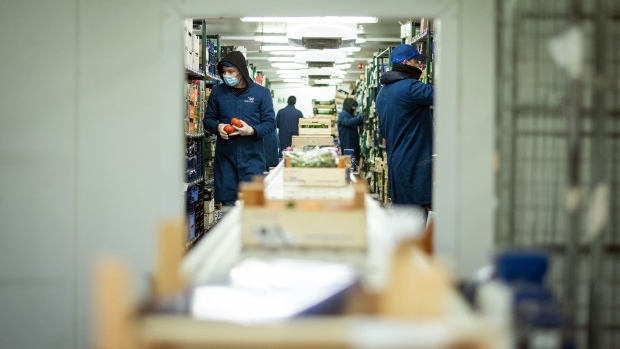 (Bloomberg) -- Housebound Americans looking to avoid supermarket anxiety have been bombarding FreshDirect, Kroger, Amazon and others for more than a month now. Incessant clicking in the hope of scoring a slot—followed by sudden cancellations or half-filled orders—are the new normal.

Seizing this opportunity, smaller upstarts have stepped in—aiming to satisfy the intense demand while building customer loyalty for when the pandemic recedes. For some of them, it’s been boom times—perhaps too much so. The logistics of being a small online grocer with a sudden surge of orders can be brutal, and ramping up a grocery delivery business can’t be done overnight.

“I’ve been watching [the coronavirus] since the start of the year, but I should have taken it far more seriously,” said Michael Robinov, co-founder of Farm to People, who said his business has grown by 400% since March 1. The Brooklyn, New York, company offers seasonal farm boxes with options to add meat, dairy and pantry items. “We’re working around the clock to fill the gap,” he said. Last month, the company tripled its workforce in response to the sudden growth, now with 35 warehouse staffers and 25 drivers.

Farm to People has already surpassed its original target—1,500 customers by the end of 2020. “Our new hope is at least five times that” and a new distribution center, Robinov said. Delivery has been the key bottleneck—for now, he’s solved that problem with an pool of off-duty Uber drivers who use Farm to People’s routing software.

But the window for small outfits like his may already be closing: the big delivery companies have been moving to radically expand their workforces. Whether this quick expansion gamble pays off for the smaller fry, only time will tell.

In 2019, online grocery sales made up just 2.7% of the broader $847 billion U.S. industry, according to Supermarket News. Consumers dabbled in online ordering, but they primarily shopped in physical stores, where products tend to be cheaper and there are no delivery fees. Darren Seifer, food industry analyst for NPD Group, also cited what he called the “banana effect.” Do you want your bananas all yellow or a little green? “People don’t like ceding control to other shoppers,” he said.

But with the arrival of Covid-19, everything changed. Online shopping suddenly became as much as 15% of business for some supermarket chains, said Doug Baker of the industry lobby FMI. Average order size has almost tripled in size, too.

Companies like Imperfect Foods, which buys produce-rejects and soon-to-expire foods, have been racing to grab their piece. “We’ve seen more than 40% growth in our active-user base since the start of 2020,” said Chief Executive Officer Philip Behn. “It’s a race every week to fill orders.”

To keep up with the onslaught, the San-Francisco based company is putting $2 million towards improvements in its five packing-centers. To staff up, Imperfect tapped catering companies and restaurant chains for access to their laid off employees. Meanwhile, Imperfect’s business model allowed for “enormous opportunities to recover food that has stalled in restaurants, hotels, and airlines,” Behn said.

But when it comes to quick expansion, smaller companies are also running into obstacles unique to this moment in time. These include taking employees’ temperatures on arrival, issuing gloves and masks, creating hand-washing stations and spacing out workers. Imperfect has an employee whose sole job is to ensure adherence to U.S. Centers for Disease Control and Prevention guidelines.

“What affects us as customers, affects our employees. We have to double down on helping [them],” said Behn. “This has led to challenges in keeping our production levels up.”

One company that said it’s been able to keep pace with orders is Brooklyn’s Local Roots. Initially created as a sort of grocery speed dating site (customers picked up their seasonal produce at bars and cafes), it now delivers boxes right to your house (whether you’re single or not).

Founder Wen-Jay Ying said she was ill-prepared for the deluge. “Overnight, we had to hire 12 people who were healthy, wanted to work, weren’t going to file for unemployment and had a car.” Next, she had to ensure her farmers had product and that her team was proficient with new routing software and prepared for a never-ending stream of customer questions. “Right now, we’re working seven days a week, 24-7.”

For Ying, who said she wants to fundamentally change the way people eat, it’s a dilemma. “How do you maintain quality in a value-based company with scalability, but how do you stay in business if you aren’t scaling? You won’t have the resources that customers want in a reasonably priced way,” she said.

Just as local farmers have tried to reorient themselves from restaurants to consumers, Regalis, a leading importer of luxury foods to the U.S., had a decision to make. When the crisis descended, its New York City warehouse was stacked high with crates of A5 Wagyu steaks, Golden Osetra caviar and black truffles. Some 95% of its business was selling to Michelin-star restaurants. No more.

“Our first point of order was to take sales off the street,” said David Yourd, a partner at Regalis. But luckily, the company had been working on an e-commerce website. That, plus a steady stream of Instagram posts, allowed Regalis to re-focus on selling fancy food to anyone who wanted it. Initially the company used drivers for deliveries, but after the first week, Yourd said he felt safer using Fed-Ex.

When Natoora, a fresh produce company, lost almost all of its restaurant business, it had to rapidly find new outlets that would sustain its employees and farmer networks. “We have a massive amount of product we need to move, and a huge loss in sales,” said Franco Fubini, the company’s CEO. “It’s a big gap to fill.”

Natoora, which operates in New York, London and Paris, reached out to high-end supermarkets to sell his stock while turning his chef-focused app into a consumer facing one, offering premium produce like ramps and nettles. The sudden pivot is paying off, he said: In London, revenue from home delivery is equal to 75% of his pre-pandemic wholesale sales, and his New York orders will soon cover 100% of his wholesale revenue there before the pandemic.

Right now, these small companies are filling a critical need. But longer term, they’re betting customers will stick with them when things go back to “normal.” NPD’s Seifer suggests there’s room for optimism. “What do they offer that the others don’t already—service or the assortment? If there is some other additional benefit that they offer, then there might be hope.”