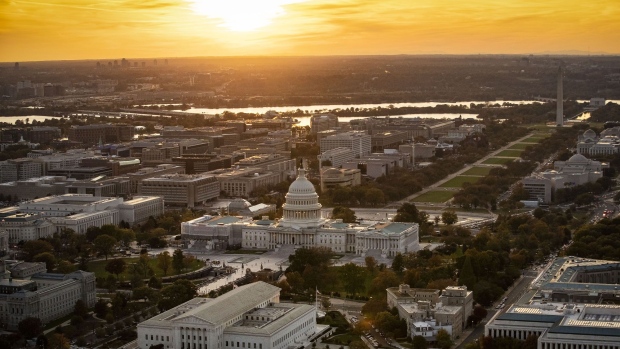 The U.S. Capitol is seen at dusk in this aerial photograph taken above Washington, D.C., U.S., on Tuesday, Nov. 4, 2019. Democrats and Republicans are at odds over whether to provide new funding for Trump's signature border wall, as well as the duration of a stopgap measure. Some lawmakers proposed delaying spending decisions by a few weeks, while others advocated for a funding bill to last though February or March. Photographer: Al Drago/Bloomberg , Bloomberg

(Bloomberg) -- A coalition of environmentalists who felt burned by the lack of climate-change measures in the infrastructure deal President Joe Biden struck with senators last month are seeking $2.1 trillion in spending on those initiatives in the next bill.

The group, which includes the Center for American Progress, the Natural Resources Defense Council, the League of Conservation Voters and dozens of others, are asking Senate Budget Committee Chairman Bernie Sanders to include that much spending on climate measures in a package being assembled by Democrats, according to a person familiar with the matter who wasn’t authorized to discuss information not yet public..

Their request, a written version of which was seen by Bloomberg News and has been delivered to Sanders and other committee members in recent weeks, seeks $225 billion for clean-energy tax credits, $250 billion for a clean-energy standard and $100 billion in consumer incentives for clean vehicles. It also seeks billions more for water infrastructure, nuclear-energy incentives, electric buses and efficient electric appliances.

The effort comes as the committee debates the size and scope of the fast-track budget reconciliation bill that can be passed using a procedure that avoids a Republican filibuster in the Senate and is designed to carry most of Biden’s $4 trillion longer-term economic agenda.

The groups’ demands, which are unlikely to be realized in full, illustrates the pressure Democrats are under to make good on Biden’s vow to eliminate carbon emissions from the electric grid by 2035 and the rest of the economy by 2050.

Sanders previously had outlined a $6 trillion proposal covering Biden’s agenda as well as an expansion of Medicare, additional climate change items, immigration reform and a permanent extension of the child-care tax credit. But that measure is expected to shrink as agreement is sought from moderates in the caucus to pass both the budget resolution and a follow-up reconciliation bill, which requires 50 votes for passage along with Vice President Kamala Harris’s tie-breaking vote.

Biden’s $2.25 trillion infrastructure plan, released in the Spring proposed $750 billion in energy spending, including $400 billion to extend tax credits for wind, solar and other clean sources, $100 billion for the electric grid, and $60 billion on energy research and development among other projects, according to a BloombergNEF analysis.

But a $579 billion infrastructure deal, announced last month by Biden and a group of Democratic and Republican senators, didn’t include a mandate sought by the White House that could have required utilities to produce power only from carbon-free sources and left nearly all the other proposed spending on the cutting room floor.

A spokesman for Democrats on the Senate Budget Committee didn’t respond to a request for comment.