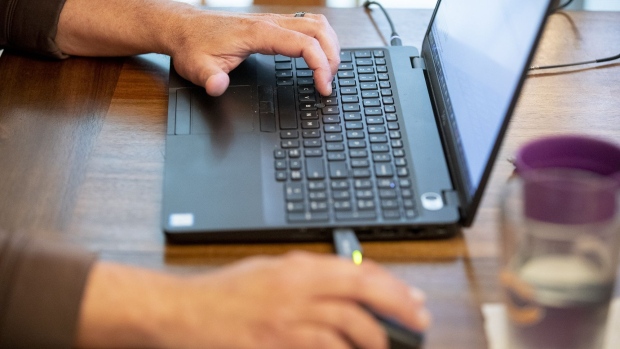 A person uses a laptop computer while working from home in an arranged photograph taken in Princeton, Illinois, U.S., on Tuesday, Sept. 8, 2020. Coronavirus cases in the U.S. increased 0.4% as compared with the same time Monday to 6.32 million, according to data collected by Johns Hopkins University and Bloomberg News. Photographer: Daniel Acker/Bloomberg , Bloomberg

(Bloomberg) -- German startup Grover, which allows consumers to rent electronics like smartphones and tablets, is raising $1 billion in financing by securitizing its inventory in an unusual arrangement to fund expansion.

London’s Fasanara Capital is providing the financing and Grover will set up a special-purpose entity that will own the company’s inventory of laptops, speakers and other gear, the German startup said in a statement on Wednesday. The structure will allow Grover to separate its company equity from the debt it has taken on. The inventory would work like collateral against Grover’s debts.

“We knew that we needed to get the assets off the balance sheet and we needed to raise funds without equity to finance those products,” founder and Chief Executive Officer Michael Cassau said in an interview. “This is a highly liquid global market you can monetize.”

Cassau, who previously worked at Goldman Sachs Group Inc., said Grover is hoping to get a credit rating for the debt and that investors could see returns around the mid-single-digits. While other industries have created securities backed by their assets, including shipping containers and mobile phone towers, Cassau said that he wasn’t aware of anyone in the electronics field doing something similar.

The company also extended its latest funding round to $100 million from about $71 million previously. Grover expects it will seek additional capital later this year, people familiar with the matter said. A Grover representative declined to comment on future financing plans or its valuation.

Grover, founded in 2015, plans to use the latest funding round to increase the number of items in circulation by almost 10-fold to 5 million by 2024. It’s also going to add new markets in Europe and could enter the U.S. as soon as this year, Cassau said.