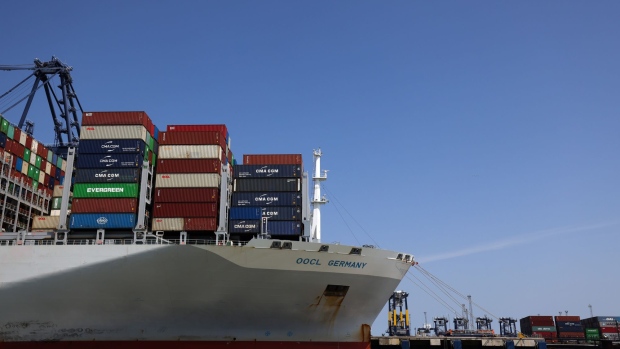 Shipping containers loaded on the hull of the OOCL Germany container ship, operated by Orient Overseas Container Line Ltd. docked at the Port of Felixstowe Ltd., a subsidiary of CK Hutchison Holdings Ltd., in Felixstowe, U.K., on Thursday, June 24, 2021. The skyrocketing price of shipping goods across the globe may hit your pocketbook sooner than you think -- from that cup of coffee you get each morning to the toys you may want to buy for your kids. Photographer: Chris Ratcliffe/Bloomberg , Bloomberg

(Bloomberg) -- A measure of activity at U.S. service providers and manufacturers in September grew at the slowest pace in a year, restrained by nagging supply-chain and labor challenges as well as the delta variant.

The IHS Markit flash composite index of purchasing managers at service providers and manufacturers dropped to 54.5 from 55.4 a month earlier, the group reported Thursday. Readings above 50 indicate growth and the gauge has declined each month since hitting a record 68.7 in May.

“The slowdown was led by a cooling of demand in the service sector, linked in part to the delta variant spread,” Chris Williamson, chief business economist at IHS Markit, said in a statement. “However, while manufacturers have seen far more resilient demand, factories face growing problems in sourcing enough supplies and labor to meet orders.”

Results were similar in the euro area, where business activity at service providers and manufacturers slipped to a five-month low. Growth slowed especially sharply in Germany and France, IHS Markit said.

The group’s gauge of activity at U.S. services slid to its lowest level since July of last year. Employment in the sector shrank for the first time since June 2020 amid persistent hiring difficulties and more limited demand.

At manufacturers, the PMI slipped to a five-month low. While still robust at 60.5, the gauge eased on the back of the weakest output reading since October and slower growth in orders.

Order backlogs at manufacturers, however, shot up to the highest in data back to 2007. Production lines remain beset by materials shortages, shipping challenges and difficulty retaining and attracting skilled labor.

But factories are having success passing along the higher costs. The report showed the IHS Markit measure of factory output prices rose to a fresh series high. Manufacturing lead times remained close to the longest on record.

“The upshot is yet another month of sharply rising prices charged for goods and services as demand outpaces supply, and higher costs are passed on to customers,” Williamson said.