We are playing the defensive side of the market: UBS' Pierre Ouimet

Stocks retreated as a downbeat outlook from another giant chipmaker added to recession fears, with many traders unwilling to make any risky bets before Wednesday’s pivotal inflation reading.

A rally in the S&P 500 from its June lows hit a wall amid a fourth straight day of losses. The Nasdaq 100 underperformed as Micron Technology Inc.’s warning showed more evidence of the collapsing demand for chips. All 30 companies in the Philadelphia Semiconductor Index fell. In late trading, Coinbase Global Inc., the largest US cryptocurrency exchange, sank on a disappointing revenue.

Investors turned more cautious ahead of July’s consumer-price index, which is forecast to cool a bit while still remaining at high levels. The report will come on the heels of recent jobs figures underscoring solid wage growth and US productivity data highlighting another surge in labor costs that could further complicate the Federal Reserve’s efforts to tame inflation.

“A hotter-than-anticipated CPI report will pressure markets this week. An in-line report could be taken in stride as investors have priced in a 75 basis point move by the Fed” in September, wrote Lindsey Bell, chief markets and money strategist for Ally. “Either way, we still have to get through another jobs report, more inflation data, and Jackson Hole before we get to the Fed’s September meeting. It could be a volatile several weeks ahead.”

Timing the peak in inflation isn’t easy, especially after June’s CPI print turned out to be hotter than expected, but being right in doing so has brought investors a hefty return.

Those buying the S&P 500 at major inflation peaks going back to 1940 have seen the index post an average rally of 16 per cent in the next 12 months, according to data compiled by Leuthold Group. A big caveat is: the price-to-earnings ratio has averaged 12.7 in prior instances on a normalized basis, compared with above 20 now. 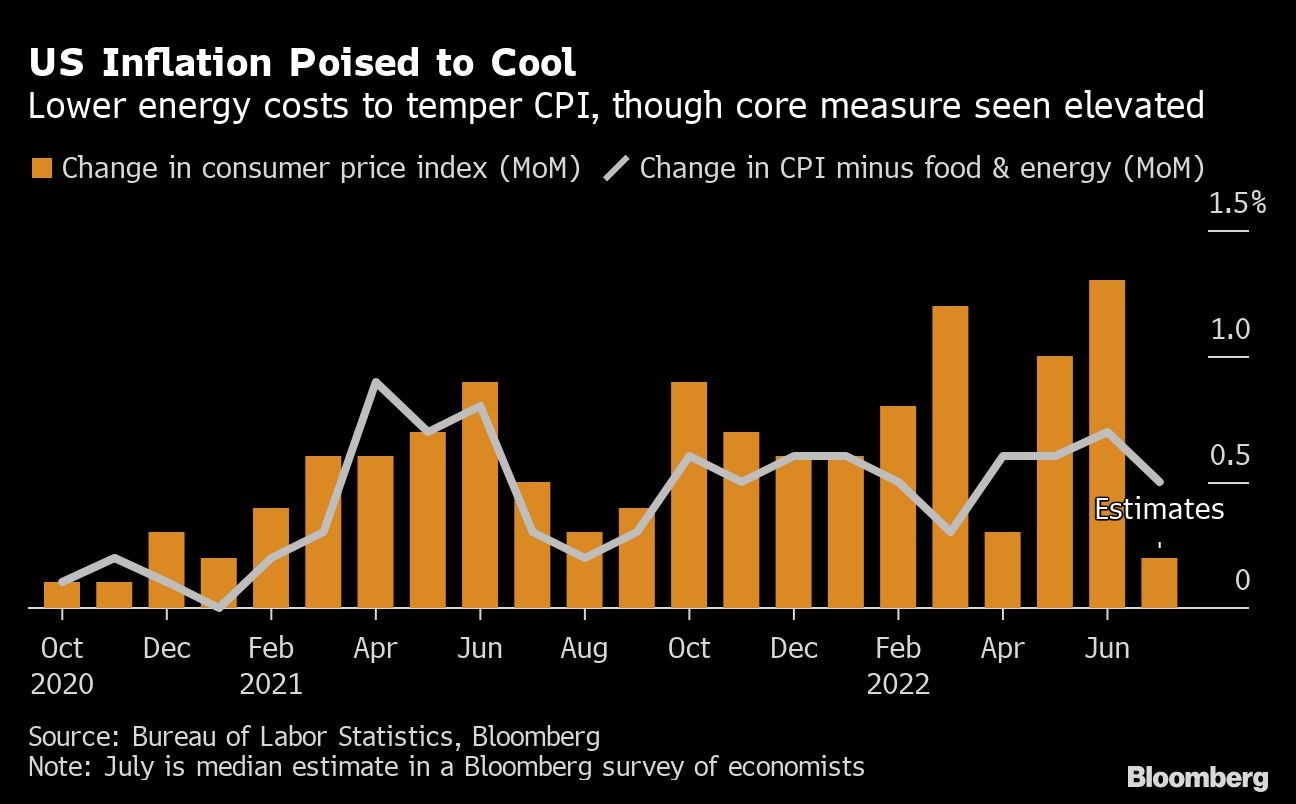 Highly optimistic analyst recommendations are flashing a warning signal for stocks, according to Citigroup Inc. strategists led by Robert Buckland. An index of global sell-side ratings “is back to peak bullishness levels reached in 2000 and 2007, after which global equities halved,” they wrote.

“Near the mid-June lows, we discussed that we would not be selling equities given markets were already pricing in a lot of bad news. However, with the strong equity rebound since then and our view that the near-term upside is capped, the risk/reward appears less favorable,” said Keith Lerner, chief market strategist at Truist Advisory Services.

Among other corporate highlights, the surge in meme shares like Bed Bath & Beyond Inc. and GameStop Corp. sputtered. Novavax Inc. plummeted as the drugmaker slashed its revenue forecast on disappointing demand for its COVID-19 vaccine that trailed competitors getting to market. Boeing Co. delivered 23 of its 737 Max jetliners and three freighters in July, down from 51 total commercial aircraft shipments in June.