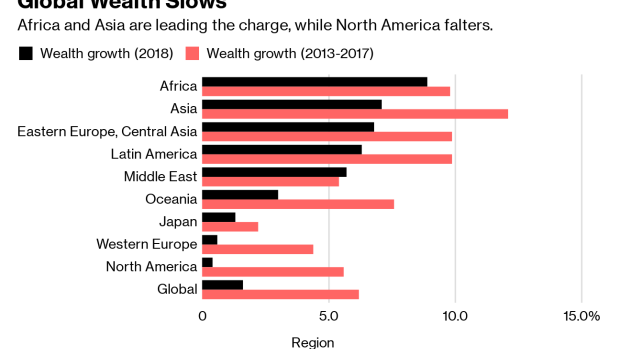 (Bloomberg) -- Gains in global personal wealth ground to a near-halt in 2018, rising just 1.6% for the weakest growth in five years.

The slowdown is a steep drop from the 7.5% gain in personal global wealth in 2017, and the 6.2% compound annual growth rate from 2013 to 2017, according to an analysis by Boston Consulting Group released Thursday.

“For the first time since 2008, we saw wealth growth was negative when you take into account all the factors,” she said.

Still, the amount of personal financial wealth sloshing around the world remains enormous: $206 trillion, according to BCG’s tally.

Although overall growth was down, some regions did well. Increases ranged from 8.9% and 7.1% for Africa and Asia, respectively, to anemic gains of 0.6% for Western Europe and 0.4% for North America.

The ranks of millionaires continued to swell, increasing 2.1% in 2018 to 22.1 million. BCG estimates that by 2023 there will be 27.6 million globally. Switzerland boasts the greatest density of millionaires among its adult population at 7.5%, followed by the U.S.

From 2018 to 2023, the global ultra-high-net worth crowd will see the fastest increase in their personal wealth, with a compound annual growth rate of 7.8%, BCG projects. The group represents 7% of total wealth, according to BCG, as does the next lower wealth tier -- those with $20 million to $100 million.

From 2019 through 2023 wealth worldwide will grow at a compound annual rate of 5.7%, according to BCG. Asia, however, is expected to see wealth rise by a compound annual growth rate of 9.4% to $58.2 trillion by 2023. Latin American wealth is projected to expand 8.2% during that period, while Africa and the Middle East combined are expected to climb 7.7%.

Estimates of how much money sits in offshore centers varies, but BCG estimates that $8.7 trillion of the world’s wealth crosses borders. Over the past five years, that pool of money has been expanding by 5% a year.

Over the next five years, China will account for roughly one-third of the flows into offshore financial centers, with most of it likely to end up in Hong Kong and Singapore, Zakrzewski said.

The two cities, and perhaps the U.S. and United Arab Emirates, “have the strongest exposure to growth markets as offshore financial centers,” and should expand at annual compound rates of 7% to 8%, she said.

Asia’s total personal wealth is expected to reach $58 trillion by in 2023, which would leapfrog it over Western Europe’s projected $53 trillion.

To contact the reporter on this story: Suzanne Woolley in New York at swoolley2@bloomberg.net