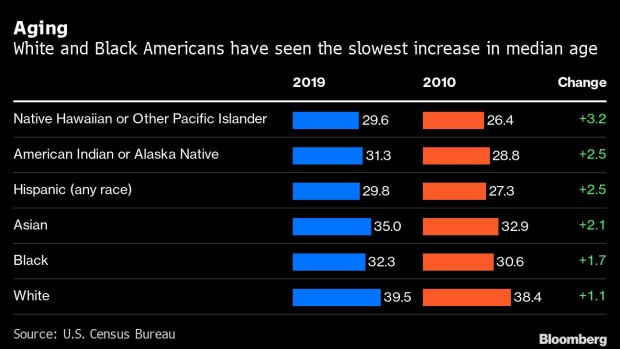 Senior citizens wait in line for food at a senior services center in Reno. , Bloomberg

(Bloomberg) -- More than a quarter of all American adults have reached traditional retirement age, according to the 2019 U.S. Census Bureau report released this week.

The number of U.S. residents 65 and older jumped 34% to 54 million last year from the 2010 Census report. This outpaced both the rate of growth in the working-age population as well as that of children.

“No other age group saw such a fast increase,” said Luke Rogers, chief of the Census Bureau’s population estimates branch.

The graying of America will likely place an additional burden on already-stressed federal, state and local governments. The share of U.S. debt is projected to increase from 79% of the pre-pandemic economy to 101% by the end of this year and 118% by 2030, according to the Committee for a Responsible Federal Budget.

State and local governments are bringing in less tax revenue thanks to widespread layoffs and business closures associated with Covid-19 containment efforts, which will make it difficult to balance their budgets.

“And this is going to cause higher taxes,” said University of Michigan economist Richard Curtin. “That represents a significant draw on consumers’ budgets.”

It will place a bigger burden on those who’ve left the workforce and are depending on Social Security and Medicare.

The aging population is pushing up the insolvency dates of the major trust funds that many seniors reply on. The CRFB now sees the Medicare Hospital Insurance trust fund going bust by 2023, and the combined Social Security trust funds depleted by 2031.

Almost 13 million Americans are older than 80, and the number of centenarians almost doubled from 2010 to more than 100,000 last year, according to the data.

To view an age pyramid of the U.S. population, click HERE

In 2019, the dependency ratio showed that for every 100 people of working age, there were almost 54 other Americans potentially needing support.

The aging of America is widespread, with 49 of 50 states showing an uptick in the number of older residents. North Dakota was the only state to see a decline in its median age, from 37 years in 2010 to 35.3 in 2019.

The median age of Whites, at 39.5 years, rose by about a year since 2010, but had the smallest increase among races.