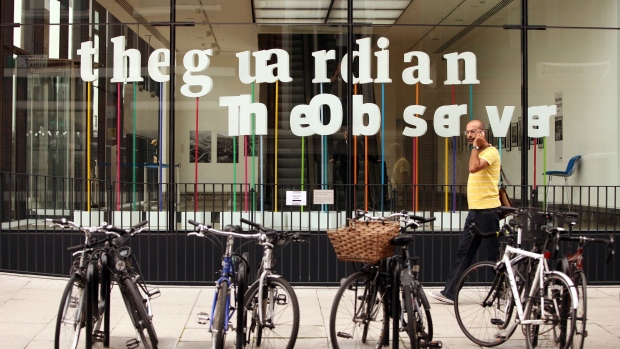 LONDON, ENGLAND - AUGUST 05: A general view of Kings Place, which houses the offices of the The Guardian and The Observer newspapers on August 5, 2009 in London, England. The Guardian Media Group's Sunday newspaper, The Observer which was founded in 1791 and is the world's oldest Sunday newspaper, is potentially facing closure. (Photo by Oli Scarff/Getty Images) , Photographer: Oli Scarff/Getty Images

(Bloomberg) -- The Guardian Media Group has told UK staff their personal data has been accessed in what the news publisher said it believes was a ransomware incident, according to an email to employees seen by Bloomberg.

It’s “clear that we experienced a highly sophisticated cyber attack involving unauthorized third-party access to parts of our network, which appears to have been triggered by a phishing attack,” said Chief Executive Officer Anna Bateson and Editor-in-Chief Katharine Viner in the message. “The attack affected many of our key systems, our IT network and some of our data.”

Compromised data may include staff names, addresses, bank accounts, salaries and identity documents such as passports, meaning the potential for identity fraud, the message said. A spokesman for the Guardian confirmed the contents of the email. The business has roughly 1,500 global staffers, mostly based in the UK, he added. The company believes the data of US and Australia staff is not affected but its review is ongoing.

Guardian Media, best known for its British newspaper, disclosed the attack on Dec. 21. The latest email included new details about the scale and implications of the incident. Executives have also reported the incident to the UK Information Commissioner’s Office — Britain’s data watchdog — and law enforcement.

The paper’s offices have been closed since Dec. 21, the day after the incident. The return to the workplace will be postponed until early February, the note said.