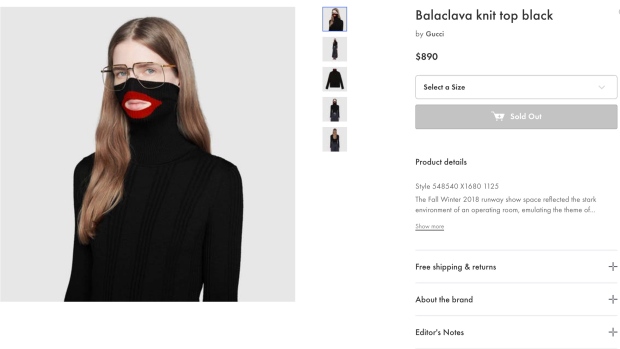 A screenshot taken on Thursday Feb.7, 2019 from an online fashion outlet showing a Gucci turtleneck black wool balaclava sweater for sale, that they recently pulled from its online and physical stores. , AP Photo

Kering SA’s Gucci withdrew a sweater resembling blackface images like those currently roiling U.S. politics, becoming the latest fashion brand to get embroiled in a controversy over perceptions of racism.

The Italian luxury label apologized for selling the US$890 black turtleneck, whose extra-high collar features a pair of exaggerated red lips around an opening for the wearer’s mouth. Gucci said it removed the item from its online and physical stores.

Gucci deeply apologizes for the offense caused by the wool balaclava jumper.
We consider diversity to be a fundamental value to be fully upheld, respected, and at the forefront of every decision we make.
Full statement below. pic.twitter.com/P2iXL9uOhs

The brand’s misstep comes as Virginia Governor Ralph Northam resists calls to resign after the revelation of a photo from his 1984 medical school yearbook page, showing one individual dressed in a Ku Klux Klan robe alongside another in blackface. He has also apologized for darkening his skin to dress up like Michael Jackson for a dance contest in that same year.

Gucci is only the latest European fashion brand to trip up. In December, Prada SpA withdrew cartoon figures from window displays after they were called out for a resemblance to racist caricatures. Dolce & Gabbana faced calls for a boycott in China after releasing ads that offended consumers; one of the co-founders later compounded the damage with racist comments. Swedish apparel chain Hennes & Mauritz AB temporarily closed some stores in South Africa earlier this year after protests against an ad that showed a black child modeling a hoodie with the text “coolest monkey in the jungle.”

Gucci has made diversity and progressive values central to the hip reboot that has sparked rapid growth for the brand since designer Alessandro Michele took over in 2015. The brand banned fur from its collections, saying the material was “not modern,” donated to a gun-control march and released an ad campaign with only black models that was inspired by the late 1960s soul music scene.

“Gucci deeply apologizes for the offense caused by the wool balaclava jumper,” the brand said in a statement on Twitter. “We are fully committed to increasing diversity throughout our organization and turning this incident into a powerful learning moment.”