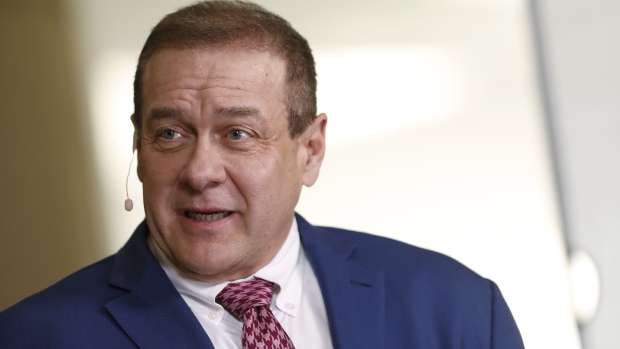 Scott Minerd, chairman of investments and global chief investment officer of Guggenheim Partners LLC, speaks during a Bloomberg Television interview at the Milken Institute Global Conference in Beverly Hills, California, U.S., on Tuesday, May 2, 2017. The conference is a unique setting that convenes individuals with the capital, power and influence to move the world forward meet face-to-face with those whose expertise and creativity are reinventing industry, philanthropy and media. , Bloomberg

(Bloomberg) -- Scott Minerd, the chief investment officer of Guggenheim Investments, is moving to Miami, the latest high-profile finance executive drawn to a state with no income tax.

Minerd, who has lived in the Los Angeles area for years, purchased two penthouses for $12.5 million and plans to combine the properties. That would create a 22,547-square-foot condo that would be the largest in Miami-Dade county, according to Jonathan Miller, president of Miller Samuel.

Minerd will keep his mansion in Marina del Rey, but plans to become a Florida resident, according to a person familiar with the matter. The move comes as Guggenheim Investments shifts toward a flexible work arrangement.

“We are planning to have flexible use of all our offices to permit people to work and live where they want,” a representative for the firm said in a statement. “This also includes facilitating people living where they wish to live while continuing to serve our clients with excellence.”

Finance titans have increasingly been drawn to Florida to escape high taxes in the northeast and California and Wall Street firms have been looking south for office space.

Blackstone Group Inc. and Ken Griffin’s Citadel have been bulking up their presence in the low-tax state, while Paul Singer’s Elliott Management has announced plans to relocate there from Manhattan. Goldman Sachs Group Inc., meanwhile, has plans to move part of its asset-management arm to West Palm Beach.

Minerd’s relocation to Florida comes despite Guggenheim’s connections in California. The firm has been a sponsor of the landmark industry event started by junk bond titan Michael Milken, whose firm Drexel Burham Lambert anchors a community of debt investors in the Los Angeles area. Minerd has counted the city’s mayor, Eric Garcetti, as a close contact.

Minerd recently expressed interest in the booming cryptocurrency industry, which has been embraced by the Miami mayor.

Minerd is coming off a strong year, with Guggenheim’s main fund beating most of its peers after it poured billions of dollars into the debt of beaten-down companies and other high-yielding securities during the doldrums of March 2020.

The condo purchases were first reported by Forbes.