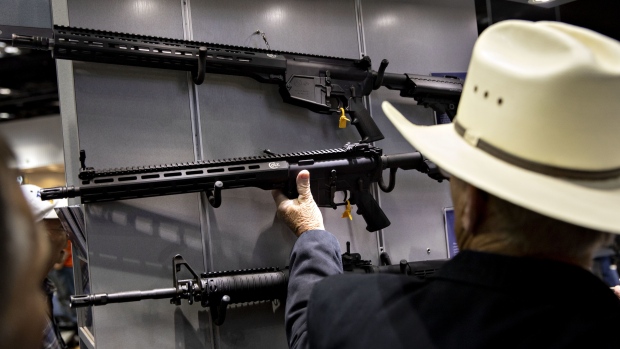 An attendee holds a Colt's Manufacturing Co. rifle on display at the company's booth during the National Rifle Association (NRA) annual meeting of members in Indianapolis, Indiana, U.S., on Saturday, April 27, 2019. Retired U.S. Marine Corps Lieutenant Colonel Oliver North has announced that he will not serve a second term as the president of the NRA amid inner turmoil in the gun-rights group. , Bloomberg

(Bloomberg) -- When Texas Governor Greg Abbott signed into law measures that would allow adults to carry handguns without a license in 2021, smiling at the dais a seat away from him was the head of the National Rifle Association.

On Wednesday, after the shooting deaths of at least 19 children and two adults at an elementary school in Uvalde, the Republican governor said more mental health support was needed for the town. He didn’t echo the calls of President Joe Biden or Senate Democrats for gun-control measures.

Abbott’s comments about deficient mental-health resources came just a day before NRA leaders are expected to host the “largest gathering of NRA members and Second Amendment supporters in the country” when their national convention opens in Houston.

The NRA has won the fight over gun rights in Washington -- for now. With the US Senate far from the 60-vote majority either side needs to drive policy, the federal government is limited to executive orders as some lawmakers seek middle ground on modest measures like additional background checks.

The battleground, meanwhile, has moved to state courts and capitols, which have seen a flurry of gun legislation -- on both the left and the right.

Those efforts may soon become even more pronounced with a pending decision from the US Supreme Court. With a six-to-three conservative majority, it is expected to overturn or significantly weaken New York state’s restrictions on carrying concealed handguns. New York was one of eight states -- along with California, Massachusetts, New Jersey, Maryland, Rhode Island, Delaware and Hawaii -- with laws that the NRA said prevented most people from legally carrying a handgun in public.

That, in turn, is likely to spur liberal states to find new ways to limit the range of public places where firearms are permitted. These “sensitive places” could include public transportation, parks, stadiums, government offices and establishments serving alcohol, leaving those with permits few places to carry guns, says Robert Leider, an assistant law professor at George Mason University.

“There are ways to write what is, de facto, an almost total ban,” Leider said. “The question is how many restrictions governments can pile on before they bump up against” the broader rights affirmed by the Supreme Court decision, he said.

An NRA representative didn’t immediately respond to an email and a voice message seeking comment.

The group’s finances have struggled recently. After peaking in 2016, the year Donald Trump was elected president, the NRA’s revenues fell 22% over the ensuing four years to $285 million in 2020, the most recent year for which data is available.

The group’s legal battles have erupted with reports in 2019 of lavish spending by its longtime boss, Wayne LaPierre, and other senior officials that sparked internal turmoil leading to the ouster of its president, Oliver North, and the departure of its top lobbyist, Chris Cox. Its legal fees hit a record in 2020 of $40 million.

At the same time, the premiere gun lobby’s victories at the state level have been steady.

In 2003, Vermont alone allowed residents to carry handguns in public without a permit. Since then, legislatures in half the states have removed permitting requirements, mostly in recent years and involving concealed firearms.

In April, the NRA marked what it said was an “Historical Milestone,” with half of states having eliminated the need for “government permission,” (aka, a permit) to carry a concealed weapon.

Another important state-level trend involves preemption statutes, which prevent local governments from restricting gun ownership and possession more than the state does. More than 40 states currently have preemption statutes on the books, versus just two in the 1970s, according to Joseph Blocher, co-director of Duke University’s Center for Firearms Law.

“Preemption statutes forbid local governments from regulating guns, and that’s where you find support for restrictions,” he says.

Blue states, meanwhile, have mostly retained or tightened firearms restrictions, prompted at least in part in reaction to tragedies like the one in Texas this week and a racist attack at a supermarket in Buffalo, N.Y. earlier this month in which 10 people were killed.

On Wednesday, New Jersey Governor Phil Murphy, a Democrat, cited recent mass shootings in urging his state to tighten what are already some of the nation’s strictest gun laws. Among his proposals are a ban on certain high-caliber firearms, mandatory safety training and safe-storage requirements.

“From Uvalde to Buffalo, recent tragedies have reaffirmed that, in the absence of substantive reform, no community is immune to the epidemic of gun violence,” he said in a statement.

At the other end of the political spectrum is Abbott, who said at a press conference Wednesday that 18-year-olds in Texas have been allowed to buy a long gun for 60 years, but that mass shootings seem to be a more recent phenomenon. He said that what had changed was a growing mental-health crisis.

“We haven’t had episodes like this before,” Abbott said. “One thing that has substantially changed is the status of mental health in our communities.”