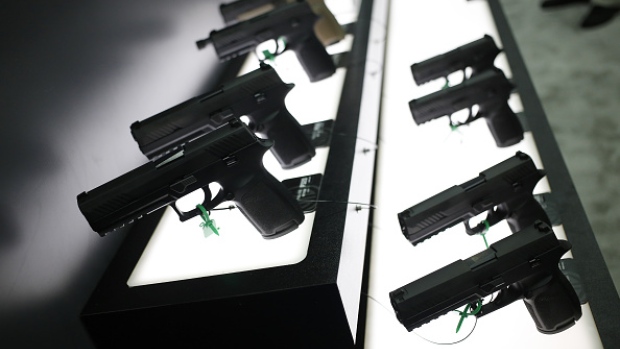 SIG P320 handguns are displayed at the SIG Sauer GmbH booth on the exhibit floor during the National Rifle Association (NRA) annual meeting in Louisville, Kentucky, U.S., on Friday, May 20, 2016. The nation's largest gun lobby, the NRA has been a political force in elections since at least 1994, turning out its supporters for candidates who back expanding access to guns. , Photographer: Bloomberg/Bloomberg

U.S. consumers are rushing to buy guns as the COVID-19 pandemic and protests over police brutality combine with U.S. presidential politics to fuel unprecedented demand.

Firearm background checks compiled by the Federal Bureau of Investigation, a proxy for gun purchases, jumped to a record in June as street demonstrations spread around the U.S. That extended a surge that began in March as the coronavirus prompted lockdowns across the country.

Gun sales are typically elevated the year people go to the polls to choose a new president, “particularly in the fall as we get closer to the election,” said Peter Keith, an analyst at Piper Sandler. “I think you’ll probably see continued strong demand around the civil unrest and the defund-the-police theme for July and August.”

Keith predicts more share gains for gunmakers, especially given the relative dearth of stocks tied to demand for firearms. Many retailers have scaled back sales following the many mass shootings in the U.S. in recent years.

Dave Brown, a Dallas media producer, said he made the decision to buy a gun at the end of May after he saw people smashing windows at a restaurant near his apartment. He said the demonstrations lasted until 2:30 a.m. and by noon he was buying a nine-millimeter handgun for US$450 plus about US$100 in ammunition.

“This is a time where no one knows what’s going to be happening around town the next day, it feels like,’ said Brown, 41. “So a lot of people are uncertain, a lot of them are scared.”

Robert Marcus, owner of Bob’s Gun Shop in Norfolk, Virginia, said sales have tripled since mid-March. He estimated that 35 per cent of purchases are coming from first-time gun buyers, and said his customers are concerned by the coronavirus crisis, protests and potential gun control legislation.

Not all gunmakers are soaring. Remington Arms Co. is preparing to file for Chapter 11 protection for the second time since 2018, the Wall Street Journal reported last week. The company is in talks for a potential bankruptcy sale to the Navajo Nation, the newspaper said, citing people familiar with the matter. There’s no guarantee a deal will be reached.

Remington has faced expensive litigation tied to the Sandy Hook Elementary School shooting in Connecticut in 2012, the Journal said. The company didn’t immediately respond to a request for comment.

Gun store owners say sales will continue to rise at least until the presidential election in November. Financial analysts are ratcheting up their revenue estimates for gunmakers after recent quarterly sales gains.

Lake Street Capital Markets projects annual sales of US$568 million for Sturm Ruger, up about 25 per cent from the estimate three months ago, according to data compiled by Bloomberg. Smith & Wesson will ring up sales of US$825.2 million, a 20 per cent increase from expectations in early March, according to the average of analyst estimates.

James Hillin, owner of Full Armor Firearms in Texas, said the store’s gun sales have increased 75 per cent since January, and that 95 per cent of those were by new gun owners.“They’re scared,” Hillin said before cutting a brief interview short to attend to waiting customers. “They want to protect themselves.”