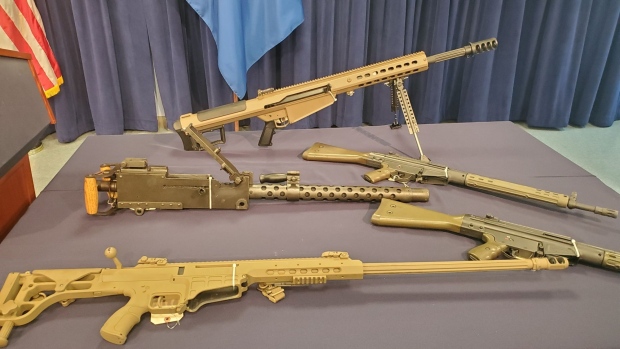 (Bloomberg) -- Haitian gangs are buying unprecedented quantities of high-powered rifles at shops in Florida and smuggling them out of the US, fueling a wave of violence that’s destabilizing the Caribbean nation, US law enforcement officials said.

In the last few months, federal agents have seen a surge in arms being sent illegally from Florida to Haiti, said Anthony Salisbury, Special Agent in Charge of Homeland Security Investigations in Miami.

“Not only have we seen a marked up-tick in the number of weapons, but a serious increase in the caliber and type of firearm being illegally trafficked,” Salisbury said at a news conference in Miami, flanked by officials from the Bureau of Alcohol, Tobacco, Firearms and Explosives, US Coast Guard and other agencies.

To drive home the point, federal law enforcement officials stood before three tables covered with semi-automatic assault rifles, machine guns and pistols that federal agents have seized recently, headed to Haiti. They included guns made by Smith & Wesson, Taurus, and other US companies, largely purchased by representatives of gangs at licensed gun dealers and sent by sea, hidden among legal cargo, to Haiti.

There’s long been arms smuggling to Haiti, especially pistols, but there’s been a shift to high caliber weapons designed for war, Salisbury said. For example, among the seized weapons were .50 caliber rifles made by Barrett Firearms, which Mexican drug cartel gunman have used to down military helicopters.

Haiti has been in turmoil since the murder of Haitian President Jovenel Moise last July. Since then, Prime Minister Ariel Henry repeatedly vowed to crack down on gang violence that he blamed for delaying long-overdue general elections.

The flow of weapons from the US is also driving a jump in undocumented immigrants trying to flee Haiti by sea in dangerous vessels, to Florida, Salisbury said.