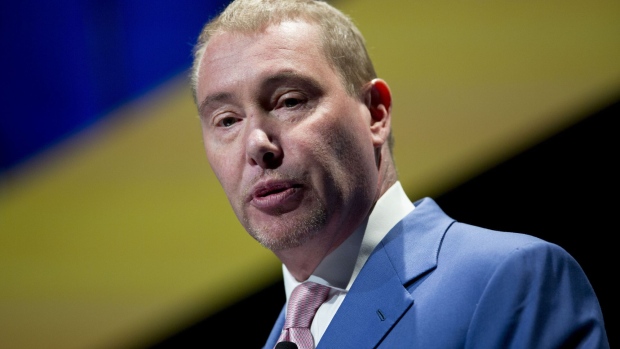 (Bloomberg) -- Jeffrey Gundlach sees “rough waters” ahead for financial markets as the Federal Reserve is poised to accelerate the end of quantitative easing and then turn toward raising interest rates.

During a webcast Tuesday about his DoubleLine Total Return Bond Fund, the billionaire money manager advised keeping an eye on the high-yield bond market, a potential “canary in the coal mine” for risk assets.

With debt levels having surged during the pandemic, the increase in borrowing costs is poised to create headwinds for economic growth, and trouble could emerge when short-term rates surpass 1%, Gundlach said. Two-year yields are currently about 0.69%.

The bond market already is reflecting signs of difficulty ahead, with the yield curve flattening. Gundlach also said that the historically low level of yields across the curve today makes this flattening a doubly powerful signal of concern.

Gundlach, 62, said the reason why Fed Chair Jerome Powell characterizes the economy as strong, but not strong enough to allow for a rate hike at this point, is that the underlying condition is in fact weak -- artificially propped up by an unprecedented degree of stimulus.

Here are some other takeaways from Gundlach’s remarks: