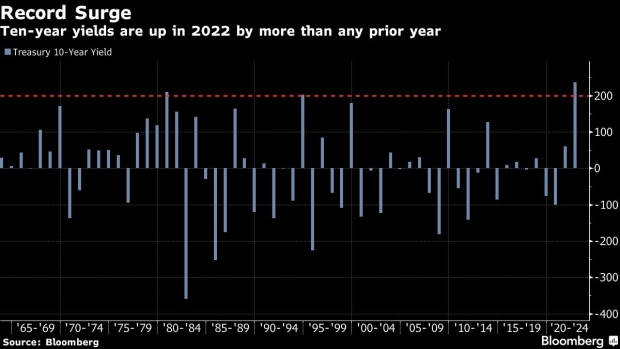 (Bloomberg) -- There’s at least one major investor who thinks the worst global bond rout in decades is creating a buying opportunity.

While US 10-year yields have climbed about 235 basis points in 2022, exceeding any annual increase on record in data going back to 1962, there was some relief on Tuesday with the benchmark yield falling 10 basis points to 3.82%.

“The U.S. Treasury Bond market is rallying,” said Jeffrey Gundlach, chief investment officer for Doubleline Capital, which manages more than $107 billion, in a tweet. “Been a long time. I have been a buyer recently.”

It’s a potentially bold call. The global bond rout accelerated this week as the UK’s plan for large tax cuts raised fears of a wave of fiscal profligacy, giving investors another reason to steer clear of government debt. Meanwhile, the Federal Reserve is leading developed-nation central banks in delivering the steepest rate hiking cycle in a generation -- and pledging to keep rates higher as long as it takes to quash inflation.

That’s proved a toxic combination for Treasuries. Investors have been burned at least twice this year, after rebounds for US bonds in May and June evaporated once the Fed made it clear the threat of a recession won’t stop it from tightening policy. Strategists underscore the potential for fresh bond selloffs, even if yields are now high enough to tempt investors.

“Treasuries are looking attractive at these levels,” said Prashant Newnaha, a rates strategist at TD Securities in Singapore. US five-year notes are yielding 4.10%, while similar-maturity inflation swaps at 2.5% signal the Fed is expected to succeed in cooling cost pressures, he said.

“While tactically there is scope to go long, strategically we see further upside on yields given our forecast for a 4.75-5% Fed Funds target and potential for European yields to head higher over coming months,” Newnaha said.

There have been three previous occasions 10-year yields spiked by more than 225 basis points within a year, but each time they ended with a more modest increase.

All of those episodes were in the 1980s, when then-Fed Chairman Paul Volcker hiked rates to record highs to tame inflation. The biggest such move came in 1981, when the yield jumped as much as 341 basis points, only to end the year up by 155 basis points.