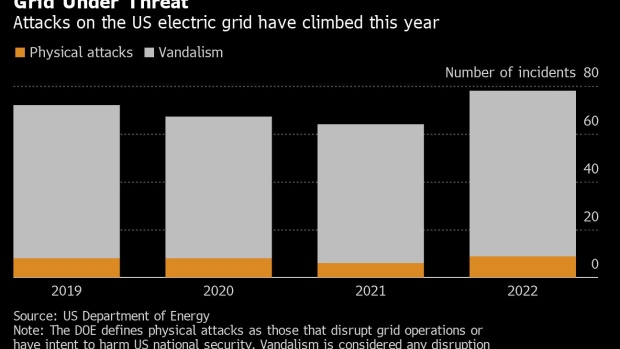 (Bloomberg) -- Shots were fired near a Duke Energy Corp. hydropower plant in Ridgeway, South Carolina, Wednesday evening — the second incident in the past week of gunfire at a US power facility after armed attacks on two substations knocked out electricity for about 45,000 homes and businesses in neighboring North Carolina.

Law enforcement agencies are investigating at least eight incidents in four states in the past month, an unusual uptick of violence for power plants, which don’t typically see many physical attacks. Jon Wellinghoff, former chairman of the Federal Energy Regulatory Commission, said he couldn’t recall another month with this many physical threats to the US electric grid.

“The attacks continue to demonstrate the grid is vulnerable and we haven’t adequately protected it from physical attacks,” Wellinghoff said.

As of now, it’s unclear whether the shots fired in different states are in any way connected. Richard Maness, the sheriff’s office chief deputy for Moore County, North Carolina, said investigators are looking into all the national incidents for any possible links. His office is also working with the Federal Bureau of Investigation, he said.

Kershaw County Sheriff Lee Boan in South Carolina said that incident in the state was likely a “random act,” adding that the office is also working with the FBI. There was no property damage, injuries or power outages related to the incident.

“We currently have no evidence leading us to believe this incident involves any type of attack on the Duke Energy Hydro Station,” Boad said. “The shooting appears to be a random act and the only connection between the shooting and the hydro station is their proximity.”

In North Carolina, “it looks like it was a targeted attack,” West Virginia Senator Joe Manchin said in an interview, adding that he had spoken with Duke Chief Executive Officer Lynn Good about the incident, which he called “very concerning”

Across the nation, it’s possible some damage to the grid could be the result of recklessness rather than a malicious attempt to cause a blackout.

“Was it some guy with a hunting rifle who saw a big target in the distance, or was it someone who was purposefully trying to destroy something? You have to have some context to understand the seriousness of these events,” said Wellinghoff, the former FERC chair who’s now the CEO of GridPolicy Consulting Inc.

For now, the main takeaway continues to be the fragility of the US power grid at at time when a crunch for energy markets has also raised utility bills and strained electricity supplies.

“Generally speaking, transformers and substations are key parts of the grid, but they are exposed and highly vulnerable,” said Mark Christie, a FERC commissioner. “Transformers are literally in every neighborhood and city block, so they are easy targets for malicious vandals or just a drunk with a gun and an attitude.”

A substation in Jones County, North Carolina, was attacked on Nov. 11 when vandals damaged transformers, causing them to leak coolant oil, according to the Carteret-Craven Electric Cooperative. The damage took out power for about 12,000 homes and businesses for two hours and will likely cost more than $500,000 to fix, the cooperative said in a statement.

Over the Thanksgiving holiday, attackers cut a perimeter fence and damaged equipment inside a Bonneville Power Authority substation in Clackamas County, Oregon, the company said in a Twitter post.

Firearms were used in that attack which caused significant damage, according to a person familiar with the matter.

And Portland General Electric Co. said that there was a “deliberate physical attack” in late November at a substation in the Clackamas area, according to a statement Wednesday. There was a brief outage, but power was quickly restored.

(Updates with details from Kershaw County Sheriff in South Carolina in paragraph five, and adds that firearms were used in Clackamas County, Oregon over Thanksgiving holiday.)