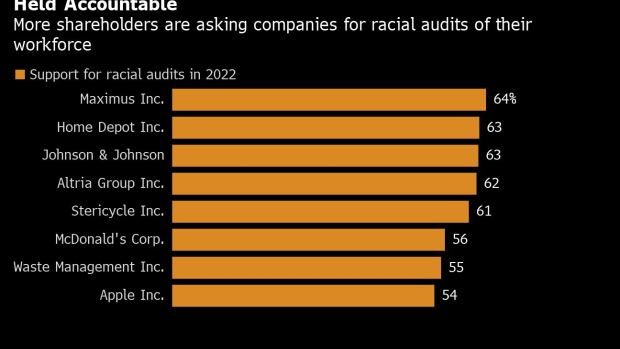 (Bloomberg) -- As Americans struggle to find common ground on a growing list of social issues, investors are demanding some of the country’s biggest companies take action.

A majority of Sturm Ruger & Co.'s shareholders want the gunmaker to investigate the human rights impact of its firearms. McDonald’s Corp. and Apple Inc. and at least a half dozen other companies have been asked to measure and account for potential racial disparities in the workforce and local communities. Abortion also was on the agenda at several company meetings, including Lowe's Cos. and Walmart Inc.A record number of shareholder proxy questions addressing issues of racial justice, gender equality and gun violence have been on the agenda at annual meetings this year. While a majority failed — most shareholders campaigns do — some initiatives received significant backing. Average support for racial audits has been running at about 46% and eight of the resolutions passed, according to Bloomberg Intelligence. BlackRock Inc. recently released research that showed about two-thirds of resolutions that get 30% to 50% support lead to companies partially or fully meeting the requests.

“This is how corporations are being held to the fire,” said Amanda Jackson, economic justice campaign manager for civil rights advocacy group Color of Change, which has been pushing companies to conduct third-party racial audits. “The groundswell, the groundwork, has been calling for companies to be more accountable.”

And the growing momentum has been increasingly backed by large asset managers such as BlackRock and Vanguard Group Inc., which have been more willing to back plans agitating around previously taboo topics. Sexual harassment revelations spurred by the #MeToo movement and the racial injustice protests sparked by the murder of George Floyd have combined to bring greater public attention — and corporate promises — to address societal inequities.

Proxy voting advisory companies led by Institutional Shareholder Services Inc. and Glass, Lewis & Co. also have been active in recommending shareholders support social topics. Home Depot Inc., Johnson & Johnson, and Waste Management Inc. were among the companies where requests for independent racial audits succeeded. The civil-rights initiative was the only shareholder proposal to gain the backing of the majority of votes at McDonald’s annual meeting.

“The ball is now in the board of directors’ court to show that they’re going to be serious and do a quality audit,” said Dieter Waizenegger, executive director at SOC Investment, which has been advocating for racial audits. It remains to be seen whether companies will respond with robust reports that go beyond “greenwashing,” he said.

Conservative shareholder advocates have countered with requests for their own twist on the racial audit, riding a growing  backlash against companies making business decisions governed by environmental, social and governance principles. The National Center for Public Policy Research Inc. filed a dozen resolutions with companies, including Bank of America Corp. and Walmart, demanding reports that assess whether their initiatives are detrimental to the civil rights of workers other than those “companies label diverse.” The proposals received less than 4% backing from investors.

The shareholder request for a human-rights impact assessment at Sturm Ruger, which attracted 68.5% support, is more proof that big investors are more willing to confront controversial topics, said Judy Byron, a member of the Adrian Dominican Sisters, who advocated for the report as part of the Interfaith Center for Corporate Responsibility. The focus on guns comes as the US continues to grapples with mass shootings, most recently at grocery store in Buffalo, New York, and an elementary school in Uvalde, Texas.

A similar resolution will confront Smith & Wesson Brands Inc. later this fall. And Mastercard Inc. shareholders will vote June 21 on whether the company should restrict the use of its credit cards to purchase so-called ghost guns, or kits that can be assembled into working firearms without serial numbers or federal registration.

Sturm Ruger Chief Executive Officer Christopher Killoy said June 1 during the company’s annual meeting that institutional shareholders are “blindly” following the guidance of ISS and Glass Lewis. The gunmaker has said it promotes responsible ownership and isn’t directly the cause of human rights abuses. “I anticipate that the board will take up the matter in the near term and decide how best to proceed,” he said.

Shareholder proposals asking companies to report on  abortion restrictions have been less successful. One filed at Lowe's won 32% backing, while a near identical request at Walmart got just 13%. Results of a third resolution filed at TJX Cos. aren’t yet available. All three proposals had the support of ISS, but not Glass Lewis. Companies also are being asked to measure whether their political contributions are being used to weaken abortion rights, said Shelley Alpern of nonprofit Rhia Ventures, who coordinated and drafted the proposals.

“So many companies are dragging their feet on this issue,” she said. “We hope that they hear from employees and other stakeholders and realize that this is in their long-term interests.”