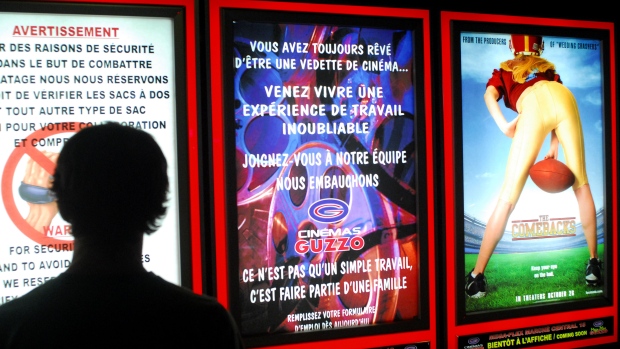 MONTREAL -- Guzzo Cinemas is looking to expand beyond Quebec to other major Canadian cities.

The Montreal-based cinema chain says it has been looking for opportunities in areas including Vancouver and Calgary.

Guzzo Cinemas president Vince Guzzo says he's hoping the expansion will allow him to take advantage of opportunities in other cities and find new synergies for his business, which also includes a construction company and Giulietta Pizzeria restaurants.

Despite the struggles theatre businesses have faced in recent years with the growth of streaming services, Guzzo says the industry is "booming" and he feels the streaming is only causing consumers to seek more personal ways to take in films.

Guzzo Cinemas expansion will put the company in competition with entertainment giant Cineplex Inc., which owns over 150 theatres.

To counteract box office volatility and streaming companies, Cineplex has diversified its offerings beyond cinemas with gaming restaurant complexes the Rec Room and Playdium.