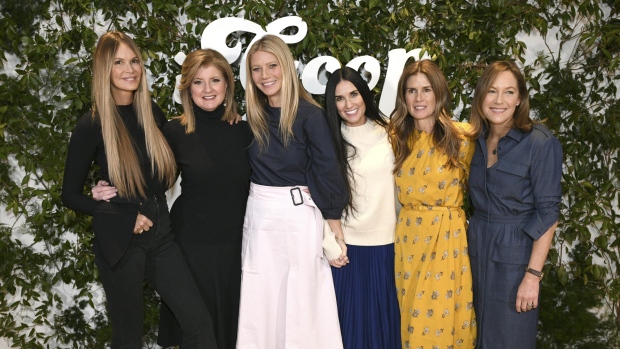 Goop Inc., the lifestyle brand helmed by Gwyneth Paltrow, is best known as an online product platform for luxury goods. Yet, to the surprise of the medical community, the company has become the epicenter of the multi-trillion dollar wellness industry.

The market, which spans everything from mind-body fitness to preventative medicine to spa tourism, was valued at US$4.2 trillion in 2017, and grew almost 13 per cent the two years prior, according to the nonprofit Global Wellness Institute. “Personal care, beauty and anti-aging” represents the most lucrative sector topping more than US$1 trillion, while “healthy eating, nutrition and weight loss” takes second place at US$702 million. Paltrow is partially responsible for this growth. Her company, which launched as a newsletter for recipes and products a decade ago, has dominated the conversation among women seeking alternatives to traditional medicine.

At the March 9 “In Goop Health” conference in New York’s Seaport district, women in expensive athleisurewear signed liability releases absolving the company of responsibility should the “services, products, or equipment involved in the event” require later medical treatment. It’s the second time the conference has been held in New York.

Upon entering the event space over looking the East River, attendees—who paid US$1,000 or US$4,500—were given free Keds sneakers and an orange drink called “GOOPGLOW,” which tasted vaguely like Fanta. Unprompted, a male server said the sweet concoction would “revitalize the skin.” The conference, which began in 2017, has expanded in recent years from Los Angeles to London, promoting products ranging from “psychic vampire repellent” to an US$85 “goop medicine bag” of gemstones. All are available for sale on the company’s website.

Goop now makes 70 per cent of its total revenue through product sales, offering everything from Chanel bags to CB2 pink velvet sofas, according to the company. Its own line of products, including Paltrow’s G. Label clothing brand and Goop dietary supplements, have become the company’s fastest growing revenue stream, seeing 50 per cent year-over-year growth. Revenue from wellness products and events has nearly tripled in the last two years. “We’re marketing to a very actionable consumer because they’re a shopper,” said Chief Revenue Officer Kimberly Kreuzberger in an interview.

Paltrow herself took the stage in New York with Caroline Myss, a self-proclaimed “medical intuitive” gifted with “biospiritual consciousness.” This condition, she told the 600-person crowd, allows her to sense illness and disease in people before they’ve been diagnosed by a physician. “I have friends with chronic issues that western medicine isn’t healing,” nodded Paltrow.

The pair praised attendees for their open-mindedness to alternative medicine. “You’re here because you’re a part of a new wave of thinking,” Myss said. It’s a movement open to psychedelic medicine, all-natural skincare, superfoods, and Reiki energy healing.

Since it began fundraising, Goop has pulled in more than US$82 million from venture capital firms and outside investors, and is valued over US$250 million, according to PitchBook Data, a market research firm. (The company noted this is a somewhat dated valuation). And there’s demand for brand partnerships, too. Major players like Lululemon, Tumi, Native Shoes and Ketel One Botanical have sponsored integrations during the company’s health conferences.

“Gwyneth was super sophisticated in how she thought about the market opportunity,” said Tony Florence, a general partner a Goop’s first institutional investor, the venture capital firm New Enterprise Associates. “She saw the trends around self-care early.”

But the company has faced criticism for promoting health products that lack evidence of medical benefit. Last year, Goop agreed to pay US$145,000 to settle allegations it made unverified health claims about US$66 jade egg and rose quartz “eggs” meant to be inserted into one’s genitals to enhance sexual energy and balance hormones, and the drinkable “Inner Judge Flower Essence Blend,” which was said to prevent depression. The unvetted health and wellness claims reportedly pushed Condé Nast to end its relationship with the platform last year. Goop contends the split was mutual and amicable.

“Paltrow and other celebrity wellness brands are emblematic of a broader issue,” said Timothy Caulfield, a professor of health law and policy at the University of Alberta and the author of Is Gwyneth Paltrow Wrong About Everything? “They are pushing an ethos built on pseudoscience.”

Goop, which never admitted wrongdoing during the lawsuit, agreed to refund customers who purchased the products and stop making claims about their efficacy. The company has since introduced a “Science & Regulatory Wellness Portal,” which aims, by mid-2019, to offer proof of the quality, safety and efficacy of all the products it sells. The project has enlisted a science, research and regulatory team composed of a certified acupuncturist, a nutritional biochemist and a traditional Chinese medicine doctor, among others. “We’re creating controlled growth around the broader Goop brand,” said Kreuzberger when asked about the lawsuit. “We would never compromise the integrity and trust that we have spent a decade creating.”

Paltrow has repeatedly said her platform is not “prescriptive,” but rather serves as a space to discuss interesting holistic alternatives for women—a population that’s long been underserved by traditional healthcare systems.

“There’s an idea that women are, at our source out of our reproductive abilities, hysterical,” said Goop Chief Content Officer Elise Loehnen. “Women’s experiences are real and we’re validating them.”

Indeed, there are considerable health and treatment disparities between men and women. Although women report more severe levels of pain, they’re treated less aggressively with painkillers, according to research from the University of Maryland. And the gender pain gap is only the tip of the iceberg. Other research shows doctors have greater difficulty connecting women’s symptoms with their proper diseases than they do among men. Women are less likely to be believed when they identify symptoms, too.

Caulfield believes Paltrow has exploited these gaps in women’s healthcare coverage for profit. Simply being exposed to medical misinformation increases its believability. “Research tells us consistently that a good narrative will always overwhelm data,” he said. “These kind of conferences legitimize magical thinking.”

But the women who attended the recent conference weren’t all true believers. Most were professionals: Public relations and brand experts, along with beauty industry representatives looking to gain a better understanding of how everything Paltrow touches—no matter how medically absurd-sounding—turns to gold.

Leigh Winters, who is launching her own aromatherapy skin-care line, trekked from San Francisco to New York for the networking opportunities. “I’ve been trading numbers with PR people,” she said. “It’s an expensive day, but it’s a potent crowd and you never know who you’re going to meet.”

Winters, who holds a master’s degree in neuroscience, is skeptical of some of the events offerings. “Smart people question everything,” she said. “But brand differentiation is the name of the game. Goop isn’t just a trend, it’s literally changing the way the whole world is living their lives.”

“Goop is a branding exercise,” said Rachel Hillman, a director of public relations at Full Picture, whose company paid for what she called a “reconnaissance mission” to the conference. “It’s less about the products and services, and more about the package they come in. It’s appealing being endorsed by someone who’s life is aspirational. If you have the means, you can be just like G.P.”

Many of the products and treatments featured at the event have gained mainstream acceptance simply through association with Paltrow’s platform.

“Four years ago, IV therapy was looked at as crazy, but Gwyneth pushed it to the forefront,” said Shaun Hayward, the director of operations at The Hydration Room, an IV and injection therapy company that set up a stand at the conference.

To Hayward’s right, women line up and pull down their pants down so that nurses can administer bright-red b-12 shots. The injections “offer mental clarity and energy, while clearing brain fog,” he explained.

“Goop is a leader in the field, and their brand exposure is important to us,” Hayward said, as yet another woman pulled aside her Lululemon leggings for the injection.

Walking away from the stand, she turned to her friend and laughed. “What did I just get?”