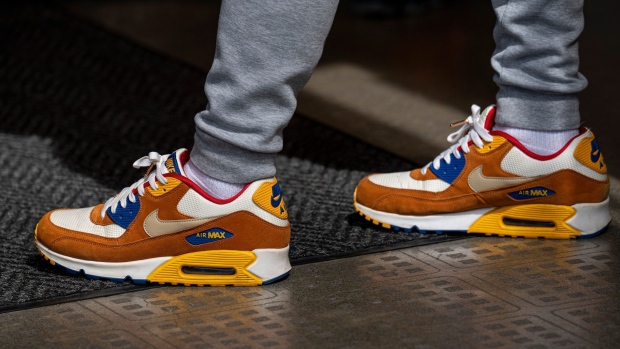 U.S. and European retail brands in China are suddenly facing a dilemma: Embrace cotton from the contentious Xinjiang region and come under attack in the West, or reject it and risk a boycott in the world’s second-biggest economy. Investors are getting spooked by that prospect, sending shares lower on Thursday.

Hennes & Mauritz AB was blasted by the Communist Youth League and the People’s Liberation Army Wednesday after social-media users dug out an undated company statement about accusations of forced labor in Xinjiang. Calls to boycott the Swedish retailer, which gets 5.2 per cent of its global revenue in China, quickly spread to include Nike Inc., which has previously said it won’t source products from the region due to labor concerns. Brand ambassadors in China for both firms cut ties with the companies in recent days.

“Want to make money in China while spreading false rumors and boycotting Xinjiang cotton? Wishful thinking!” the Communist Youth League said in a post on Weibo, referring to H&M. One of the PLA’s Weibo accounts called H&M’s statement “ignorant and arrogant.”

At a testy meeting between top diplomats of the U.S. and China last week, Politburo member Yang Jiechi made extended remarks attacking the U.S.’s human-rights record and calling on the world to stop interfering in China’s “internal affairs.” Foreign Ministry spokeswoman Hua Chunying, who this week hit the U.S. and Europe over everything from the slave trade and Nazism to the killing of George Floyd and alleged hoarding of coronavirus vaccines, on Thursday called the Xinjiang forced labor allegations “malicious lies fabricated by anti-China forces.”

“We can’t tolerate any forces bringing shame on and tarnishing the pure and flawless Xinjiang cotton,” Gao Feng, a spokesman for the Commerce Ministry, said at a separate briefing Thursday. “Chinese consumers have acted in response to the so-called business decisions made by some companies based on false information. We hope the relevant companies will respect market laws, correct wrong practices, and avoid the politicization of commercial issues.”

Chinese firms are now rallying around Xinjiang, which produces more than 80 per cent of the country’s cotton. Anta Sports Products Ltd., the Chinese sneaker giant that owns the Fila brand, and Hongxing Erke Sports Products Co. were among companies that issued statements saying they will continue to source the material from the region. Shareholders rewarded firms that displayed patriotism, while punishing those with links to Western brands.

Anta shares surged as much as 11 per cent in Hong Kong, the top performer on the benchmark Hang Seng Index. Xinjiang LaChapelle Fashion Co. was at one stage up almost 40 per cent. Nike supplier Topsports International Holdings Ltd. closed 12 per cent lower for its worst-ever drop. 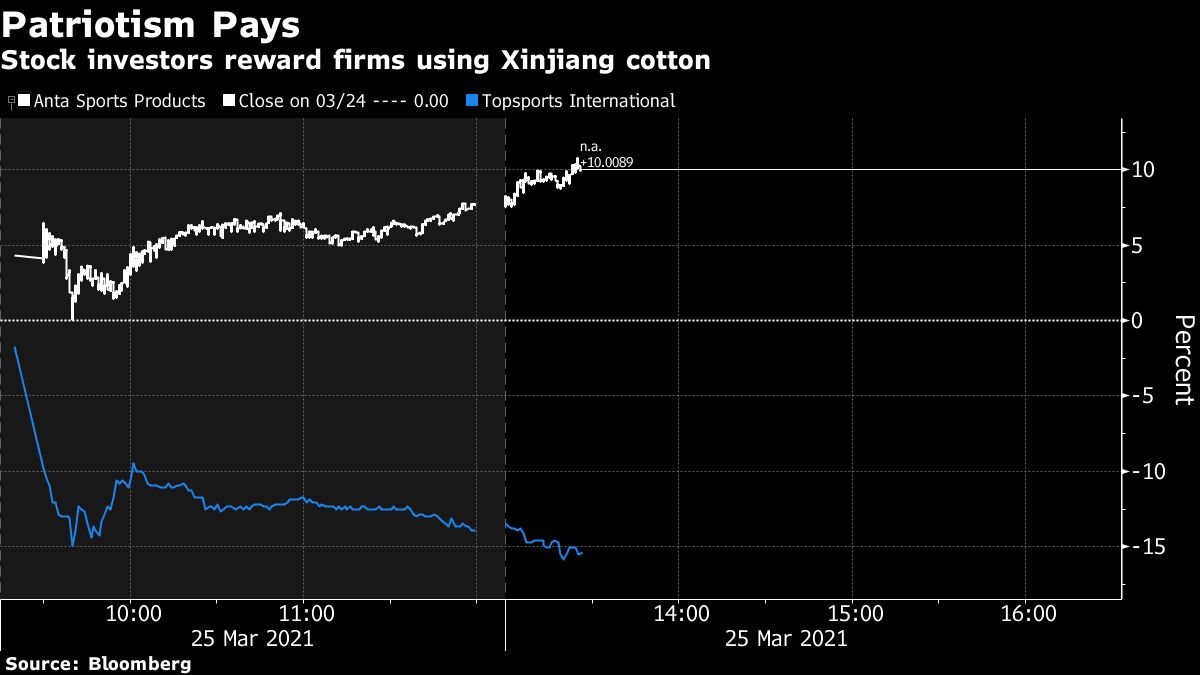 But those remarks did little to stem the growing anger in China. H&M no longer appears on Alibaba Group Holding Ltd.’s e-commerce platform Tmall, where the retailer had previously had a presence. Alibaba didn’t immediately respond to a request for comment.

“Companies caught in the crossfire can be heavily penalized, as they end up in China on the wrong side of consumer preferences, social media commentary, and e-commerce platforms,” said Luca Solca, an analyst at Sanford C. Bernstein. “European mass fashion retailers are torn between this and having to stand on the right side of western consumers’ concerns.”

“It’s concerning,” said Mark Tanner, managing director of Shanghai-based marketing and branding firm China Skinny. “If the bipolar trajectory continues, brands will need to make more conscious decisions weighing up how consumers in China will react versus those in the West.”

Xinjiang has steadily become a heated issue between China and the West as reports emerged that more than one million mostly Muslim ethnic Uyghurs were put in reeducation camps, prompting the U.S. and others to accuse Beijing of genocide. China has denied the accusations, with officials regularly calling it “the biggest lie of the century.” Beijing says its policies are lifting the region out of poverty, boosting the economy and countering extremism.

In January, the Trump administration ordered a halt to all imports of cotton and tomato paste from Xinjiang. That came a month after the U.S.-based Center for Global Policy published a report alleging new evidence from Chinese government documents and media reports of hundreds of thousands of Uyghurs being forced to pick cotton by hand through coercive state-mandated labor.

China, the world’s largest cotton consumer and also the biggest exporter of textile products, imports between 2-3 million tons a year to meet demand, largely from U.S. and Brazil. Xinjiang cotton is considered the highest quality, and Chinese government buys it from farmers to fill state reserves.

Companies like H&M are now finding themselves caught in the middle over the issue. In the undated statement, H&M said it’s “deeply concerned by reports from civil society organizations and media that include accusations of forced labor and discrimination of ethnoreligious minorities.”

Inditex previously said in a statement that it was aware of allegations of social and labor malpractice in supply chains in Xinjiang, and that it has zero tolerance for forced labor. While an excerpt of the statement was still available on the Google search engine Thursday, the link to the full statement was cut.

Marks & Spencer Group Plc became one of the first U.K. retailers to sign a pledge in January to exit the region by a coalition of civil society organizations and labor unions. M&S said in a statement at the time that 100 per cent of the cotton for M&S clothing is “sustainably sourced and M&S is already one of the few retailers that does not work with any supplier in or source from Xinjiang.” The company hasn’t operated stores in China since 2016, and franchises in that market shut down in 2018.

U.K. online fashion retailer Boohoo Group Plc has forbid suppliers from using cotton from the Xinjiang region, and the company is considering asking them to provide certificates that they aren’t doing so, Andrew Reaney, the company’s head of ethical compliance, said in an interview.

Reaney told a parliamentary inquiry in November that Boohoo was shocked by what has been happening in Xinjiang, and all its suppliers confirmed they don’t have links to the region. The retailer doesn’t operate in China.

Chinese celebrities who previously represented H&M issued statements saying they no longer have any ties with it, adding they oppose “attempts to smear China.” Wang Yibo, a popular actor, announced he would cease all cooperation with Nike as he strongly opposes any comments and behavior that brings shame on China.

And Chinese companies like Xtep International Holdings Ltd., China’s third-largest sportwear maker, are making it clear where they stand.

“As a national brand, we’ve been using Xinjiang cotton with an annual consumption of thousands of tons,” Xtep said in an official statement Thursday. “The quality of Xinjiang cotton is world class and we’ll keep using it in the future.”