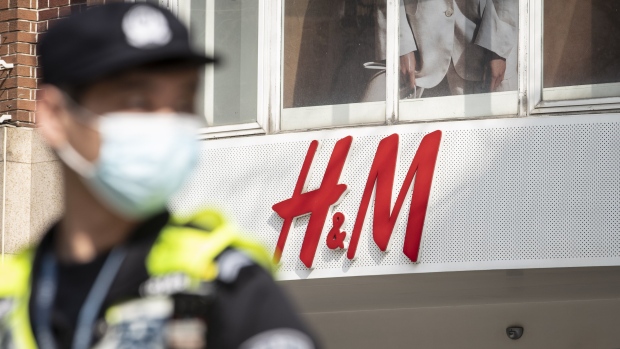 A traffic officer patrols the street in front of a Hennes & Mauritz AB (H&M) store in Shanghai, China, on Friday, March 26, 2021. China this week has pushed a campaign to boycott Western retailers after the U.S., U.K., Canada and the European Union imposed sanctions over human-rights abuses against ethnic minority Uyghurs in Xinjiang. Photographer: Qilai Shen/Bloomberg , Bloomberg

Hennes & Mauritz AB’s woes in Asia deepened after a “problematic” map on its website drew the attention of Chinese authorities, with the retailer’s attempts to resolve the matter then angering consumers in Vietnam.

H&M’s Shanghai unit was summoned by two of the city’s regulators to correct mistakes on the image, and the company said it will carry out the rectification, according to the local arm of the Cyberspace Administration of China on Friday. It didn’t elaborate on the corrections that were ordered, and it’s not immediately clear which map on H&M’s website is in question.

Changes by the Swedish company to its map are infringing on Vietnam’s maritime sovereignty, the Saigon Giai Phong newspaper reported, citing the chairman of one of the country’s consumer rights associations. H&M’s spokespeople in China and Stockholm didn’t immediately respond to requests for comments outside of business hours.

H&M recently became a a high-profile example of foreign companies punished for crossing China’s political lines, facing the brunt of the government’s ire against clothing retailers who criticize human rights abuses in the cotton-producing Xinjiang region.

It was called out by the Communist Youth League and the People’s Liberation Army for a statement dating back to September that expressed concern about reports of Uyghurs in forced labor. H&M’s outlets vanished from Apple Maps and Baidu Maps searches, and some stores in smaller cities were closed by landlords.

China claims more than 80% of the South China Sea and backs up its claim with a 1947 map that shows vague dashes -- the so-called nine-dash line --- looping down to a point about 1,100 miles (1,800 kilometers) south of its Hainan island. Vietnam, the Philippines, Brunei, Malaysia and Taiwan claim parts of the same maritime area, and have sparred with China over which claims are valid.

Vietnamese law bars companies from using images that infringe on its sovereignty, which the nine-dash line represents, the Saigon Giai Phong said. H&M opened its first store in Ho Chi Minh City in 2017 and now has 12 outlets across the country, the paper said.

On the internet, Vietnamese consumers criticized H&M’s reported acquiescence to Chinese authorities. Some called for a boycott of H&M’s products, demanded the company apologize to Vietnam and restore changes to the map or close its Vietnam outlets, the Saigon Giai Phong said.

H&M is the latest example of a business getting caught in geopolitical crossfires as countries tussle over issues ranging from sovereignty claims to maritime boundaries.

In 2019, Vietnam ordered cinemas to halt screenings of DreamWorks Animation’s “Abominable” because it showed the nine-dash line on a map. That same year, Vietnam said it will fine Volkswagen AG’s local distributor and an importer for showcasing a car with a navigation app reflecting Chinese territorial claims.

While Vietnam has been the region’s most forceful nation in pushing back against Beijing’s claims in the South China Sea, tensions have been simmering between the Philippines and China as well.

The Chinese embassy in Manila said the waters where the vessels were spotted were “traditional fishing grounds” and “part of China’s Nansha Islands.” The Philippines had issued a formal diplomatic protest to China over the matter, saying that the ships’ presence raised concerns on overfishing and safety of navigation.