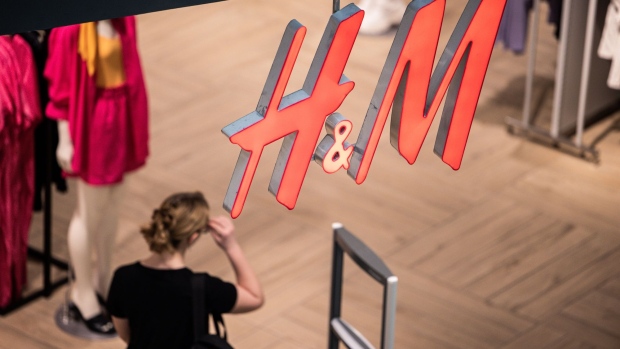 A customer enters an H&M fashion store in Budapest, Hungary, on Tuesday, June 7, 2022. Inflation in Hungary exceeded 10% for the first time in more than 20 years, putting pressure on the central bank to tighten monetary policy further and prop up the forint. Photographer: Akos Stiller/Bloomberg , Bloomberg

Next issued its second profit warning this year on Thursday. H&M said it will cut costs by 2 billion Swedish kronor ($180 million) annually after its exit from Russia and higher garment and transport costs caused third-quarter earnings to slump 86%.

Retailers are suffering a drop in demand as customers cut expenses as energy and gasoline bills mount. Meanwhile, the strength of the dollar is making clothes more expensive to source, according to H&M. Next said pressure from the highest inflation in four decades will rise into next year, aggravated by the recent slump in the pound’s value.

Next shares fell as much as 10% after the report, while H&M’s 7.2% decline brought the stock close to an 18-year low. Other European retailers also dropped, with online vendor Zalando SE down as much as 5.6% and Marks & Spencer Group Plc falling 5.6%.

H&M Chief Executive Officer Helena Helmersson, who started off the year by setting an ambitious goal of doubling sales by 2030, has been struggling recently to generate revenue growth even as rival Zara-owner Inditex SA zips ahead.

The retailer said markdowns had increased somewhat in the quarter, which also cut into profit.

Next, seen as a bellwether for the health of Britain’s main streets, cut guidance earlier this year before raising its outlook last month.

“With so many variables at play, predicting near-term sales trends is unusually difficult,” Chief Executive Officer Simon Wolfson wrote. “All the more so with recent government stimulus measures yet to take full effect.”

The British clothing and housewares chain said that profit for the year will total £840 million ($905 million), compared with previous guidance of £860 million. Full-price sales in the second half are expected to drop 1.5% rather than climb 1%.

All retailers are battling against weak consumer demand in the UK. Prices in British shops hit a fresh record high this month, with brands increasingly having to pass costs onto consumers. Online fast-fashion retailer Boohoo Group Plc cut its profit guidance Wednesday.