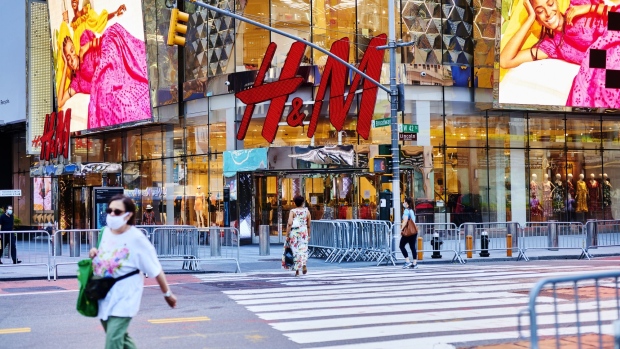 Pedestrians pass in front of a Hennes & Mauritz (H&M) store in New York, U.S., on Monday, June 22, 2020. No city is more important to America’s economic recovery than New York. The economic output of the New York metro area, estimated at $1.8 trillion, rivals that of entire nations. Photographer: Gabby Jones/Bloomberg , Bloomberg

Hennes & Mauritz AB reported a return to profit that surged far past analysts’ expectations, a bullish sign for purveyors of fast fashion.

The Swedish clothing retailer estimated pretax earnings reached about 2 billion kronor (US$230 million) in the three months through August, based on preliminary results. That’s eight times the average analyst estimate and almost double the highest forecast. The shares rose as much as 13 per cent in Stockholm Tuesday morning.

Low-price fashion retailers such as Primark have been gaining market share as consumers return to shops in search of casual wear for working from home. H&M attributed the earnings to well-received collections and a fewer markdowns than it expected. The report soothed concern about H&M’s perennial issue with a buildup of inventory.

“The level of price reductions is still a bit higher than last year, but substantially lower than what we guided for when we entered the third quarter,” Nils Vinge, director of investor relations, said via phone.

Sales fell 16 per cent in local currencies, moderating from a 50 per cent drop in the second quarter. H&M began the period with 900 of 5,000 stores temporarily closed, and by the end of August, all but 200 were open. That number is now down to 142, Vinge said.

H&M will report full earnings on Oct. 1, when investors will get more details on whether it managed to sell more of its unsold inventory. Stock-in-trade was at a record level in relation to annual sales at the end of the second quarter, at 40 billion kronor.

The company did not provide any numbers for online sales, which grew 32 per cent in local currencies in the previous quarter. However, Nils Vinge said that H&M’s e-commerce is profitable and “still going strong.”

Analysts will probably raise their expectations after the results, though the consensus for a significant recovery in sales over the coming six to nine months is too optimistic, Morgan Stanley analysts wrote.

Shares of Inditex SA, which is scheduled to report results Wednesday, rose as much as 5.1 per cent.

--With assistance from Hanna Hoikkala.