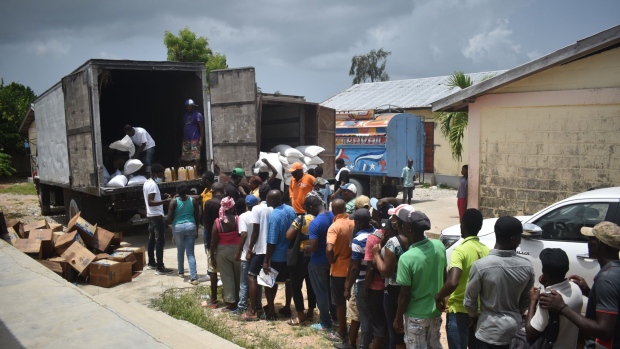 (Bloomberg) -- The devastating earthquake that hit Haiti last month will make one of the world’s longest recessions much deeper, according to the central bank.

The economy was already set to contract for a third straight year, but the quake will cause a downturn that is “way more” than the bank’s official forecast of a 2.1% contraction, bank Governor Jean Baden Dubois said Wednesday.

Economic activity is being hampered by the gang and political violence that have paralyzed swathes of the country and led to an increase in emigration. The poor security situation has caused prices of some imported goods to spike in regions that are hard to access, Dubois said.

The 7.2 magnitude quake that hit the southern peninsula Aug. 14 destroyed tens of thousands of buildings and killed more than 2,000 people. The country was already on edge after President Jovenel Moise was murdered in his home July 7.

Officials are still trying to tally the earthquake damage, but even conservative estimates suggest it will exceed $3 billion.

Haiti’s gross domestic product per capita in 2020 was just $1,199 -- about a quarter of Jamaica’s, and one sixth of the Dominican Republic’s -- and the economy has suffered several lost decades of low or negative growth.

Haiti needs to rip a page out of the Singapore playbook if it hopes to cut poverty and close the gap with wealthier neighbors, Dubois said. That means improving security as the top priority, he said.

“I believe that the first thing that Singapore got right was law and order, and this is where we have to start,” he said. Singapore’s government also invested in education and made their country attractive to foreign investors, Dubois said.

The nation’s high unemployment rate -- heightened during a pandemic that cut demand for Haitian workers in Brazil, Chile and the Dominican Republic -- has only fueled organized crime.

“Gangs are the biggest employers,” he said. “We need to create jobs, while we are putting the gangs out of a job.”

Despite its fertile land and sharing an island with the Dominican Republic -- one of the region’s most successful economies -- Haiti has been left behind. It doesn’t earn a significant amount of revenue from tourism or financial services as many other Caribbean nations do, and instead relies on remittances from Haitians overseas to pay for imports.

From October through May, the nation spent $3.4 billion on imports, but exported just $700 million. Remittances from Haiti’s 3.2-million diaspora represent about 35% of GDP, Dubois said. Even so, Haitians abroad need to do more for their country, he added.

“It’s time for all the children of Haiti -- inside and outside -- to start to give back in their way,” he said. “With that, I believe that we can get back on our feet and start moving forward and looking for a better future.”