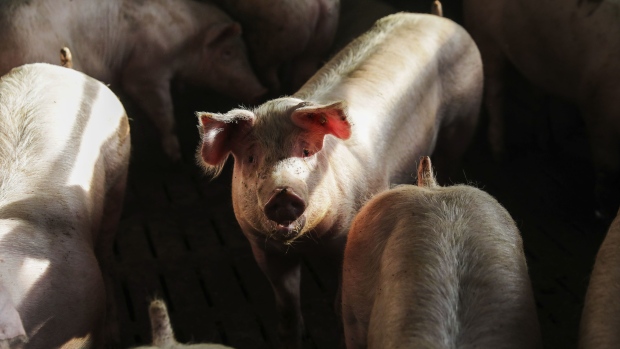 Sunlight illuminates pigs in an indoor pigsty on a livestock farm in Ohrenbach, Germany, on Monday, Jan. 20, 2020. Despite its relatively small size compared with producers like China or the U.S., Germany is a heavyweight in the global pork trade -- accounting for 15% of the world’s exports in 2017. Photographer: Alex Kraus/Bloomberg , Bloomberg

(Bloomberg) -- The Dominican Republic may have to slaughter more than 500,000 pigs -- or about half of its herd -- to curb the first outbreak of African swine fever in the Americas in four decades, according to a senior agricultural official.

Rafael Abel, president of the Chamber of Deputies’ Agricultural Commission, said the government needs to kill 100% of both sick and healthy pigs in 11 of the Dominican Republic’s 33 provinces where the disease has been detected.

If it fails to do this, the highly contagious disease will likely cause a repeat of the 1978 outbreak, in which the country’s entire pig population had to be slaughtered, he said in a phone interview Tuesday.

Those 11 provinces -- including the capital, Santo Domingo, -- are home to about 50% to 60% of the country’s 1.35 million pigs, according to the Dominican Pig Farming Federation.

The Ministry of Agriculture has started killing diseased animals and stepped up controls in a bid to isolate affected areas, but it has refrained from ordering mass eradications, and it hasn’t reported how many pigs may be sick.

The U.S., Mexico, Brazil and others have tightened border controls in response to the outbreak. While the Dominican Republic doesn’t export a significant amount of pork products, there are fears that travelers could inadvertently carry it in.

The U.S. -- the world’s largest pork producer after China -- has never had an outbreak of African swine fever and is stepping up inspections of incoming flights from the Dominican Republic.

The disease rips through pig herds causing fever, weight loss, lesions and weakness that usually kill an animal in seven to 10 days. It’s is not transmittable to humans, but there is no vaccine, making mass slaughters one of the few ways of controlling it.

African swine fever “is a devastating, deadly disease that would have a significant impact on U.S. livestock producers, their communities and the economy if it were found here,” the U.S. Department of Agriculture says on its website.

The Dominican Republic has one of the highest-per capita pork consumption rates in the Americas and, as of 2019, had been self-sufficient, said Francisco Brito, the president of the Dominican Pig Farming Federation. The industry is particularly important to the rural poor.

“There are hundreds of thousands of Dominicans who depend on pork production, even if it’s keeping a few pigs in their backyard,” he said. “We call pigs the poor man’s piggy-bank.”

Adriano Sanchez Roa, an opposition politician who used to head the country’s agricultural bank, still recalls trucks loaded with dead pigs after the 1978 outbreak. He says the government been slow to respond to the current crisis. The first cases of the disease were thought to have surfaced in April but weren’t confirmed until last week, he said.

“They didn’t pay attention and it got out of control,” he said. “It’s now in 11 provinces but we have to protect the 22 provinces where it still hasn’t been detected.”