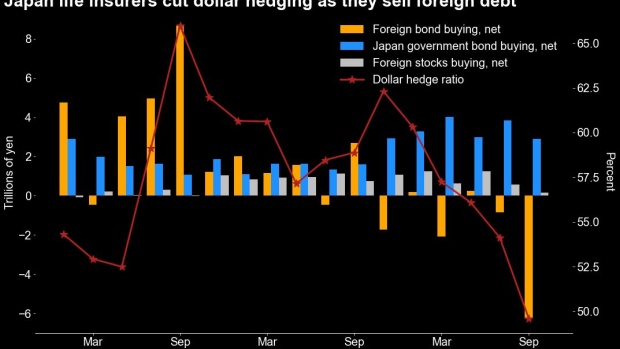 (Bloomberg) -- A rush by Japan’s life insurers to protect themselves against a stronger yen may have the paradoxical effect of accelerating gains in the currency.

A Bloomberg analysis of the earnings reports of nine so-called lifers showed just 49.6% of their combined $310 billion of dollar assets was currency hedged at the end of September, down from 54.1% six months ago. That level of exposure -- known as half-naked in the jargon -- is the lowest in data going back to 2010 and market participants suggest it will have to rise.

When investors like the lifers, a group which includes Nippon Life Insurance Co. and Dai-ichi Life Insurance Co., raise their hedging levels, counterparts on the other side of the trade usually sell dollars for yen to minimize their own foreign-exchange risk. That puts upward pressure on the Japanese currency.

“Considering the prospects for US monetary policy, investors have no choice but think about the risk of a stronger yen,” said Kengo Suzuki, chief market strategist at Mizuho Bank Ltd. in Tokyo. “The hedge ratio is more likely to rise.”

The tide has already started to turn for the once-beleaguered yen as the Federal Reserve signals a slower pace of rate hikes and falling oil prices ease downward pressures on Japan’s trade balance. They were the key factors that sent the yen tumbling almost 25% this year but it has now appreciated about 13% since touching a 32-year low in late October.

Japan’s currency strengthened for a fifth day against the dollar on Friday, extending its longest winning streak since April 2021. The dollar-yen cross fell as much as 1.3% to 133.63, breaking past its 200-day moving average.

The drop in hedging came as the insurers dumped foreign bonds in favor of local equivalents amid this year’s global debt selloff. Japan’s balance-of-payments report showed they offloaded 6.26 trillion yen ($46.4 billion) of the overseas securities in the six months through September, the most in data going back to 2014.

Hedging remains expensive and the cost for Japanese investors to protect against moves in the yen has soared amid the currency’s slump. An estimate for a three-month hedge stood at close to 5% this week, near the highest since 2008.

Still, Mizuho’s Suzuki said hedging demand will return as investors reconsider buying overseas bonds and that points to further upside for the yen.

“New investments in foreign assets with hedges will reduce yen depreciation pressures, while hedges for existing positions will be yen-buying flows,” he said.