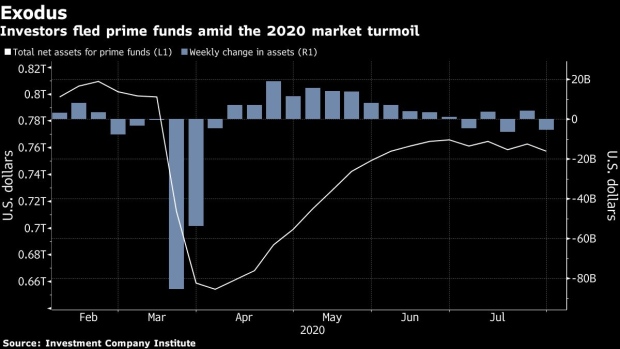 Covering about half of all global financial assets after a rapid expansion over the past decade, non-bank financial intermediaries such as asset managers, hedge funds and other investment vehicles are still not adequately protected against bank-run-like withdrawals of liquidity, according to Claudio Borio, chief economist at the Basel, Switzerland-based BIS.

The “dash for cash” in the early days of the pandemic last year has refocused regulators’ minds on a long-standing weak-spot, as panicked investors wrenched more than $155 billion from so-called prime funds in less than two months, helping to trigger a seizure in the U.S. commercial paper market and global ructions in dollar funding. Central banks have warned that elevated asset prices, rising inflation and debt in many markets signal the potential for further turbulence.

After “a period in which there is aggressive risk taking, you have a build-up in leverage. You think that markets are liquid, whereas in fact under stress they are not going to be liquid,” Borio said in an interview. “You can smooth this out by building buffers in good times -- whether that’s in the form of capital, for solvency, or in the form of liquidity, to avoid fire sales -- so that when bad times arrive you will have a bit more room for maneuver.”

The Financial Stability Board, which reports to the Group of 20 nations, is pursuing an overhaul of global regulations for money-market funds and other non-bank institutions that would seek to prevent investors from pulling their money out of such instruments in a panic. After central banks in Europe and the U.S. had to step in to support the sector during the financial crisis of 2008 and again last year, officials are seeking a longer-term fix that would prevent that happening again.

“Repeated central bank interventions in those stressed markets can generate distortions because they can encourage further risk taking,” Borio said. “What you need to do, which is what effectively has been done in the case of banks, is to come up with a regulatory framework that reduces the probability and intensity of these stress episodes and reduces the need for central banks to go in. Critically, that framework must take a system-wide perspective.”

The BIS is advocating a broad regulatory discussion that would encompass industries like those that suffered blowups this year, such as the private investing undertaken by Archegos Capital Management or the trade financing carried out by Greensill Capital. The collapse of both those firms spilled over into the formal banking system, as lenders including Credit Suisse Group AG were caught out by seizures in poorly-understood, opaque transactions.

In its quarterly report published Monday, the BIS also highlighted the risks arising from the growth of decentralized finance, or DeFi, which could potentially spill over into the real economy through the use of so-called stablecoins backed by official currencies. The rapid growth of Environmental, Social and Governance investing also brings the threat of financial turbulence due to the varying definitions for investment products that are being used, the BIS warned.