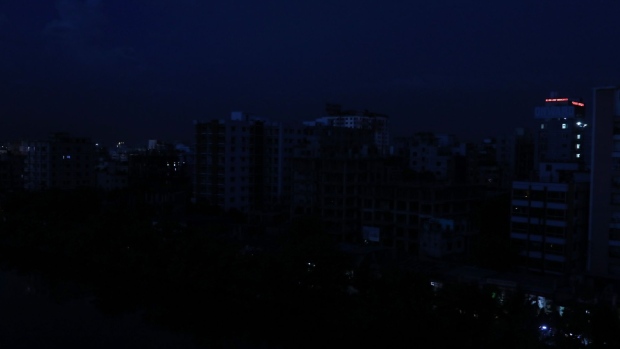 Blackout buildings during the power outage in Dhaka, Bangladesh, on Tuesday, Oct. 4, 2022. Nearly half of Bangladesh was left without electricity on Tuesday after a transmission line tripped, discomforting citizens in the humid autumn weather. , Bloomberg

(Bloomberg) -- Power was being restored across Bangladesh after the worst blackouts since 2014 cut supply to half the country, disrupting hospitals to road traffic and internet networks.

Four of the country’s eight administrative divisions -- home to about 96 million people -- lost electricity supply Tuesday after a transmission line tripped, with some outrages persisting for as long as eight hours. Supply was restored to much of Dhaka by about 9 p.m. local time, and was being resumed across other regions, according to officials.

“Engineers and technicians are working tirelessly,” the country’s power division, which will form a committee to investigate the cause of the disruption, said in a statement. “The power supply will be completely normal soon.” Nasrul Hamid, state minister for power and energy, said earlier the blackouts had been triggered by “technical glitches” in the grid.

Traffic jammed unlit roads late Tuesday and stores used candles and cellphone torches to serve customers. As the outages dragged on for several hours, many apartment blocks in Dhaka were forced to switch off back-up generators that had been running on expensive diesel fuel.

The disruptions -- the most severe since a nationwide blackout in 2014 -- follow months of difficulties for Bangladesh and other developing economies to secure energy supplies amid a global squeeze spurred by Russia’s war in Ukraine. Pakistan triggered rolling blackouts and hiked power bills in recent months, while gas deliveries bound for India have been diverted to higher paying customers in Europe.

Tuesday’s blackouts happened after a transmission line was overloaded, “creating a cascading effect on other lines,” said Yeakub Elahi Chowdhury, executive director of Power Grid Co. of Bangladesh. “We instantly went into a protection mode to prevent it from becoming a bigger problem.”