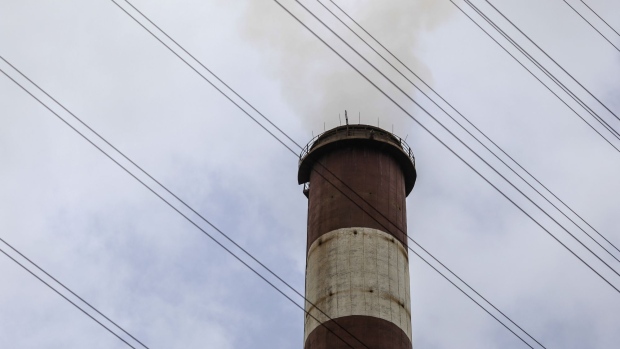 Smoke rises from a chimney as electricity pylons stand at the Tata Power Co. Trombay Thermal Power Station in Mumbai, India, on Saturday, Aug. 5, 2017. Nearly six months after his turbulent elevation to run India's biggest conglomerate, Tata Chairman Natarajan Chandrasekaran is assembling a team of dealmakers to refocus some of the group’s biggest businesses, expand its financial services and consumer businesses and sell or merge dozens of smaller units, according to interviews with senior executives. Photographer: Dhiraj Singh/Bloomberg , Bloomberg

(Bloomberg) -- Over half of the Chinese-backed overseas coal-fired power plant projects have been shelved or canceled over the past six years, underscoring the rising forces against coal investments globally.

Of the 52 projects with Chinese financing announced between mid-2014 and the end of last year, 25 have been shelved and eight have been canceled, according to a research paper published Wednesday by Beijing-based think tank International Institute of Green Finance. Only one project -- a power station located in Kalapara, Bangladesh -- has gone into operation, a sign that financing costs and risks related to coal projects have surged, while clean energy like solar power have became cheaper to produce, the paper said.

“The move away from Chinese-backed coal-fired power plants has accelerated rapidly over the past years,” said Christoph Nedopil, author of the paper and director of the institute’s Green Belt and Road Initiative Center. The changes can “accelerate a sustained green energy transition” in the countries involved in China’s Belt and Road Initiative, where most of the projects are located, he added.

Activists and global organizations have been calling for an end to the financing of coal projects worldwide since the burning of the fuel is one of the biggest sources of carbon emission. The United Nations Secretary-General Antonio Guterres has urged countries to stop investing in coal, while the Group of Seven agreed to stop international financing of coal projects this year.

China is facing increasing scrutiny for its energy investment overseas, with the latest criticism coming in Bangladesh, where a Chinese-backed coal plant project is accused of failing to ensure proper environmental inspections.

The combined value of coal projects that were canceled, mothballed or shelved over the six years was more than $65 billion, according to the paper, surging to $25 billion last year from about $2 billion in 2015. Less than $1 billion worth of new coal-fired power projects went into construction in 2020, and no new plants with Chinese financing was announced last year. Countries that had most projects canceled are Zimbabwe and Russia.

Factors driving the investment withdrawal include the rising loan spread for coal power plants as financial institutions gained more understanding of climate-related financial risks for high-emitting assets, according to the paper. Emerging carbon pricing initiatives around the world posed greater financial risks to those projects, while a volatile coal price in recent years and the fast declining cost of producing solar power also played a role.

(Updates to add final paragraph with details of companies involved. The total value of canceled or mothballed plants was corrected in an earlier version of this story.)