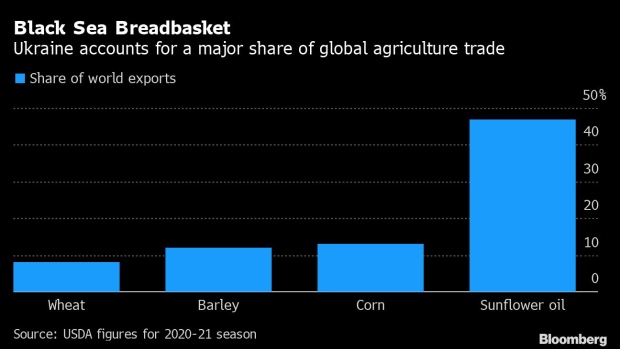 A smallholder uses a pitch fork to load wheat onto a cart during the summer harvest in Chernihiv, Ukraine, on Thursday, Aug. 10, 2017. Ukraine’s wheat harvest reached 19.1m tons as of Aug. 1, local Agriculture Ministry said in an emailed statement. Photographer: Vincent Mundy/Bloomberg , Bloomberg

Harvests of some of Ukraine’s most important crops could be cut in half this year, threatening its position as a major exporter and exacerbating already tight global supplies.

Russia’s invasion is happening at a crucial time for crops. Ukrainian farmers have just started planting corn and sunflowers, progress of which is being hobbled by field mines and a lack of fuel and fertilizers. For wheat that was sown months before the war, a chunk of the area is occupied by troops.

With ports mostly shut, farmers are also considering switching to crops more suited to local consumption than for export. Even at this early stage in the growing season the situation looks bleak, with analysts projecting output down between 30% and 55%, depending on the crop. That adds to risks for shortages of key staples and may further raise global food prices already at a record.

Ukraine is a key shipper of corn, sunflower oil and wheat, but flows have plunged since war erupted. Although it has ramped up sales by rail across its western border, volumes are just a fraction of normal seaborne trade.

The disruption sent global crop prices to an all-time high last month and has stoked worries about food security across the Middle East and Africa, home to some of Ukraine’s top customers. It’s also stifling income for local farmers, who now have the added headache of possibly running out of storage come harvest, when new crops vie with backlogged grain.

Corn, which is relatively costly to grow, has some of the biggest production uncertainties, UkrAgroConsult head Sergey Feofilov said Wednesday. The researcher forecasts the harvest at 19 million tons under an average plantings scenario, less than half of last year’s level.

“If you don’t have fuel, you can’t plant huge hectares,” Maxigrain analyst Elena Neroba said. “Some farmers still don’t have access to seeds and fertilizers. Even if they already paid for them, the delivery supply chain doesn’t work as well as it should.”

Regardless of how output is impacted by the war -- or like every year the weather -- it’s unclear how much will make it to world markets, from both the last harvest and the next.

While rail shipments are accelerating, there are wagon logjams at the border and a lack of storage for deliveries, Neroba said. At the maximum capacity of 1 million tons a month, it could take two years to clear the backlog, the Ukrainian Agribusiness Club estimates.

Unsurprisingly, Ukraine’s stockpiles are bulging, and the quality of some crops like sunflowers can deteriorate if left too long, Barva chief analyst Andrey Novoselov said. Even when ports reopen, it will take time to remove mines and damaged ships.

The government has encouraged growers to turn to locally-consumed grains, or lower-yielding oilseeds that create less of a delivery strain at harvest.

Farmers are already starting to shift away from export-focused crops. Continental Farmers Group is adding local staple buckwheat to its crop list. It’s also boosting potato plantings and is shipping 60 tons daily as humanitarian aid, it said in March.

The situation recently improved a bit in some areas, however. Russian forces departed villages in parts of regions that IMC farms. CEO Lissitsa hopes to visit in a week or two to make a final call on plantings, though mines remain a danger and time is running out. Ukraine’s spring sowing usually wraps up in May, and wheat is harvested from July.

At the same time as many farmers’ plans are up in the air, President Volodymyr Zelenskiy warned Russian forces are striking grain and fuel storage sites, though the agriculture ministry this week said the damage to infrastructure is “not crucial” yet.

“I’m learning a little bit of a new strategy,” Lissitsa said. “It’s not to think about strategy, because there’s no strategy in a war. You need to react to the situation you have right now.”