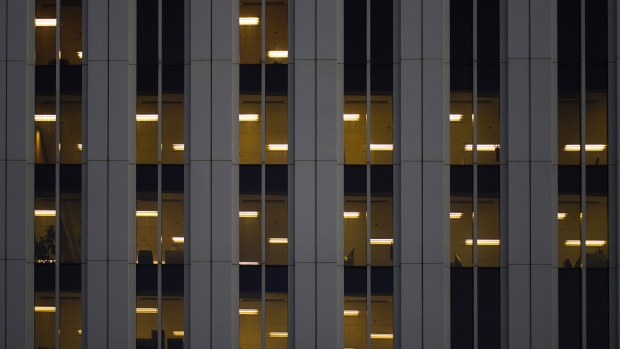 Lights illuminate empty offices in a building in the AZCA financial district in Madrid, Spain, on Wednesday, Sept. 9, 2020. The decision by Credit Suisse AG to move many European investment banking operations to Spain represents a victory for Madrid as European financial centers jostle to take business away from London after Britain’s decision to leave the European Union ended unrestricted access to its financial markets. Photographer: Paul Hanna/Bloomberg , Bloomberg

(Bloomberg) -- Almost half of London companies whose staff can work from home expect them to do so up to five days a week after the pandemic finishes, and smaller businesses are more likely than larger ones to move ahead with remote working.

That’s according to a poll of 520 business leaders by the London Chamber of Commerce and Industry, which also found that slightly more companies said employees’ main reason for concern about returning to the office was the risk of contracting Covid-19 when commuting -- rather than at the office.

While most economists concur that remote working is likely to continue in some form, the figures suggest a profound impact on the workplace that could translate into reduced footfall in major cities and lower sales for businesses that rely on people going to offices.

“Many businesses have already made decisions regarding their premises and ways of working once restrictions are lifted,” said Richard Burge, chief executive officer of LCCI. “It’s about what business has judged best for the bottom line or productivity of their company.”

About 6 million professional jobs in the U.K. that could be done from anywhere risk being outsourced to other countries, according to a separate report by the Tony Blair Institute for Global Change, the research group founded by the former U.K. prime minister.

It warned that the “mass experiment” with remote working means that companies concerned about costs could decide to keep just core staff needed for in-person collaboration and decision making.