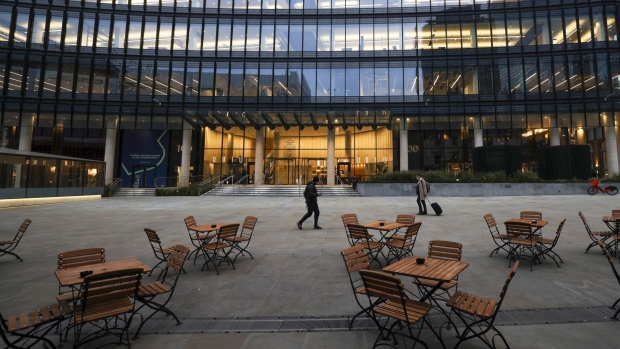 Tables on a cafe terrace outside an office complex in London. Photographer: Chris Ratcliffe/Bloomberg , Bloomberg

(Bloomberg) -- Half of U.K. businesses expect to increase their prices in response to rising wage costs and supply-chain difficulties.

That’s according to a survey by Lloyds Bank, which said that acute shortages of workers persisted into November. It showed that a quarter of companies expect to increase wages by 3% or more in the next year in an effort to retain and attract workers.

The findings are likely to fuel expectations that the Bank of England will raise interest rates rates as early as next month. Inflation is already running at double the 2% target, largely due to surging energy prices. Policy makers fear that higher prices could spread across the economy if left unchecked.

In its latest business barometer published Tuesday, Lloyds said that economic optimism dipped slightly this month due to mounting costs and supply issues, but remained well above its long-term average. Almost half of firms plan to increase staffing levels in the next 12 months.