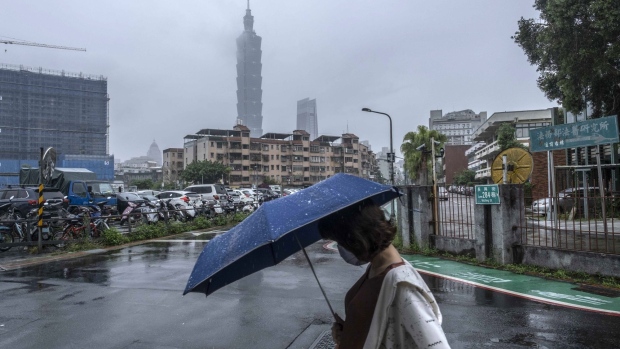 A pedestrian passes the Taipei 101 building in Taipei, Taiwan, on Tuesday, May 24, 2022. US President Joe Biden is seeking to show US resolve against China, yet an ill-timed gaffe on Taiwan risks undermining his bid to curb Beijing’s growing influence over the region. , Bloomberg

(Bloomberg) -- Almost half of US companies in Taiwan expect increased Chinese military activity to affect their operations through next year, according to a new survey.

Even so, nearly three quarters of firms said they’d not been significantly impacted by the recent Chinese exercises following the visit by US House Speaker Nancy Pelosi to the island, according to a survey of 126 US companies conducted by the American Chamber of Commerce in Taiwan.

Only a handful of those companies said that they had experienced supply chain delays or increased shipping and insurance costs, with some of them saying the disruptions had been caused by “changes in policies or other manifestations of concern from their offshore headquarters,” according to a statement from AmCham.

After Pelosi’s visit, China responded by sending warships and aircraft and fired missiles into the strait and over the island, engaging in what Taipei characterized as a simulation of an attack. The mainland also banned some imports and sanctioned officials in the US and Taiwan, but with China dependent on tech imports from the island, the economic fallout has so far been very limited.

“These actions are part of an intensified pressure campaign by the PRC against Taiwan, which we expect to continue to unfold in the coming weeks and months,” Daniel Kritenbrink, US assistant secretary of state for East Asian and Pacific affairs, said in a Thursday briefing, using the abbreviation for the People’s Republic of China, the formal name of the mainland.

After decades of experience of political tensions, most people in Taiwan went about their business largely unperturbed by the Chinese saber-rattling and threats. The US business community reacted similarly, with the respondents to the survey not indicating an extreme level of concern about serious action being taken against Taiwan over the next 2 years. On a scale of one to five, where one was “not concerned at all” and five was “extremely concerned,” the average level of concern was 2.8.

The US and Taiwanese governments announced Thursday the start of long-planned trade talks, which the American business community has been advocating for years. However, any talks are likely to take a long time, and an agreement on bolstering bilateral trade may end up being more symbolic than substantive, given reticence in both major US political parties to embrace free trade agreements.

We have “been calling for an ambitious agenda to accelerate economic cooperation with Taiwan,” AmCham Taiwan President Andrew Wylegala said in the statement. “Developments in recent weeks underscore the importance of supporting Taiwan’s resilience through stepped-up economic collaboration and integration, and the crucial fact that Taiwan’s economic relationship with the United States is also a security issue.”