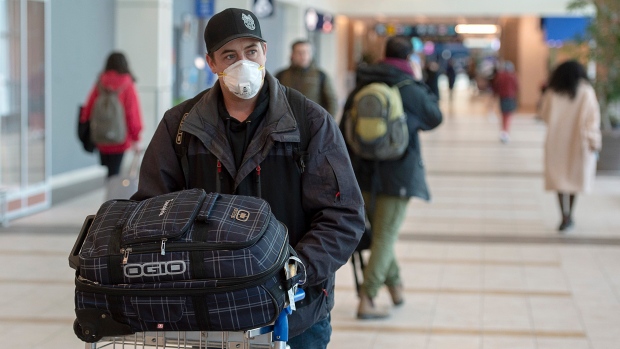 A passenger wears a face mask as he waits for a flight at Halifax Stanfield International Airport in Enfield, N.S. on Monday, March 16, 2020. , The Canadian Press

HALIFAX - People in Halifax are bracing for a series of tougher restrictions as the city deals with a rise in COVID-19 infections.

Effective Thursday and for the next two weeks, there will be no in-person dining at restaurants, while public libraries, museums, gyms, yoga studios and casinos will close.

Public gatherings in the city will be limited to five people, while retail stores will be required to limit the number of shoppers and staff to 25 per cent or less of their legal capacity.

Dr. Robert Strang, chief medical officer of health, said Tuesday the sweeping restrictions were necessary after he reported 37 new infections -- 35 of which were identified in Halifax.

Later in the day, the Nova Scotia Health Authority released a list of 21 sites -- mostly bars and restaurants in downtown Halifax -- where potential exposures to COVID-19 had occurred between Nov. 14 and Nov. 21.

Saint Mary's University confirmed that a "community member" had tested positive for COVID-19, adding that health authorities hadn't issued any exposure warnings related to the campus in Halifax's south end.