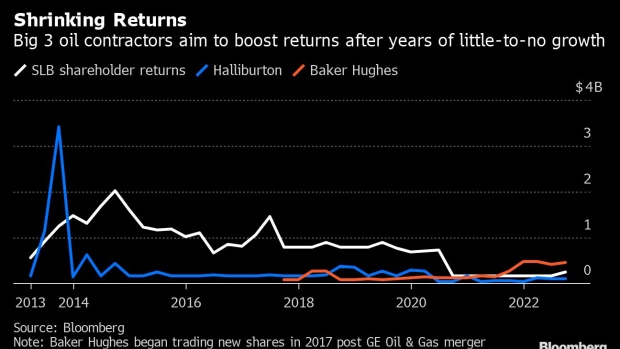 (Bloomberg) -- Halliburton Co. plans to return half its annual free cash flow to shareholders as the world’s biggest provider of fracking services follows its oil-and-gas clients in giving more profits back to investors.

Halliburton announced a 33% hike to its dividend and a resumption of its share buyback program Tuesday after reporting fourth-quarter earnings that beat analysts’ estimates. The Houston-based firm bought back $250 million in shares during the quarter, ending its streak of being one of only 83 S&P 500 companies — and one of just three energy companies — that hadn’t made repurchases in the past year.

“These actions demonstrate Halliburton’s confidence in our business, customers, employees and industry outlook,” Chief Executive Officer Jeff Miller said in a conference call with analysts and investors. “Everything I see today points to oil and gas tightness.”

Tight global crude supplies have helped drive up profits of energy producers, allowing the industry’s service companies to also benefit and find ways to reward their shareholders. SLB, the biggest oilfield service provider, said in November it was boosting its quarterly dividend and resuming share buybacks. The announcement came a week after smaller rival Baker Hughes Co. said it was buying back another $2 billion in shares and raising its payout.

Halliburton hiked its quarterly dividend to 12 cents a share a year ago, marking its first increase since 2014, when crude prices tumbled from more than $100 a barrel. The No. 2 oilfield service provider by market value said in October it had about $5 billion of share repurchases remaining under its buyback program, which began in 2006. Halliburton had slowed repurchases over the past few years as customers dialed back activity.

Halliburton reported profit of 72 cents a share excluding one-time items for the quarter, surpassing the 67 cents average estimate of analysts in a Bloomberg survey, according to Tuesday’s earnings statement. Adjusted net income of $656 million was the highest in eight years.

Sales in North America, its largest region, slipped 1% from the third quarter partly due to lower frack work attributed to weather delays, the Houston-based company said in the statement. Halliburton is the last of the big three oilfield-service giants to disclose financial results for the final three months of 2022.

--With assistance from Tom Contiliano.