Shale-oil companies are using almost all of the fracking equipment and crews available as exploration expands, accelerating cost inflation and pointing to worsening supply-chain disruptions across the industry.

North American oil drillers appear likely to expand spending by more 25 per cent this year while overseas explorers are on course for a more modest increase in the mid teens, Halliburton Co. executives said on Monday after reporting their biggest quarterly profit in seven years.

The world’s top provider of fracking services already is seeing tightening labor, trucking and raw-material supplies, and in some regions as much as 80 per cent of workers are transplants recruited from other areas. Even something as mundane as the sand Halliburton blasts into wells to help fracture oil-soaked rocks is getting harder to source, Chief Executive Officer Jeff Miller said during a conference call with analysts.

The squeeze is proving a boon to Halliburton, which lifted its dividend for the first time since 2014 and said orders for pumping gear have more than doubled. The company’s fracking business is working at full capacity and oil companies are paying higher prices for so-called completion work. ConocoPhillips and peers such as Devon Energy Corp. have been warning since last year that oilfield inflation was a burgeoning threat.

“This is a fantastic set of conditions for Halliburton,” Miller said. “Our current completion tool order book has more than doubled from a year ago signaling strong growth and profitability again in 2022.” 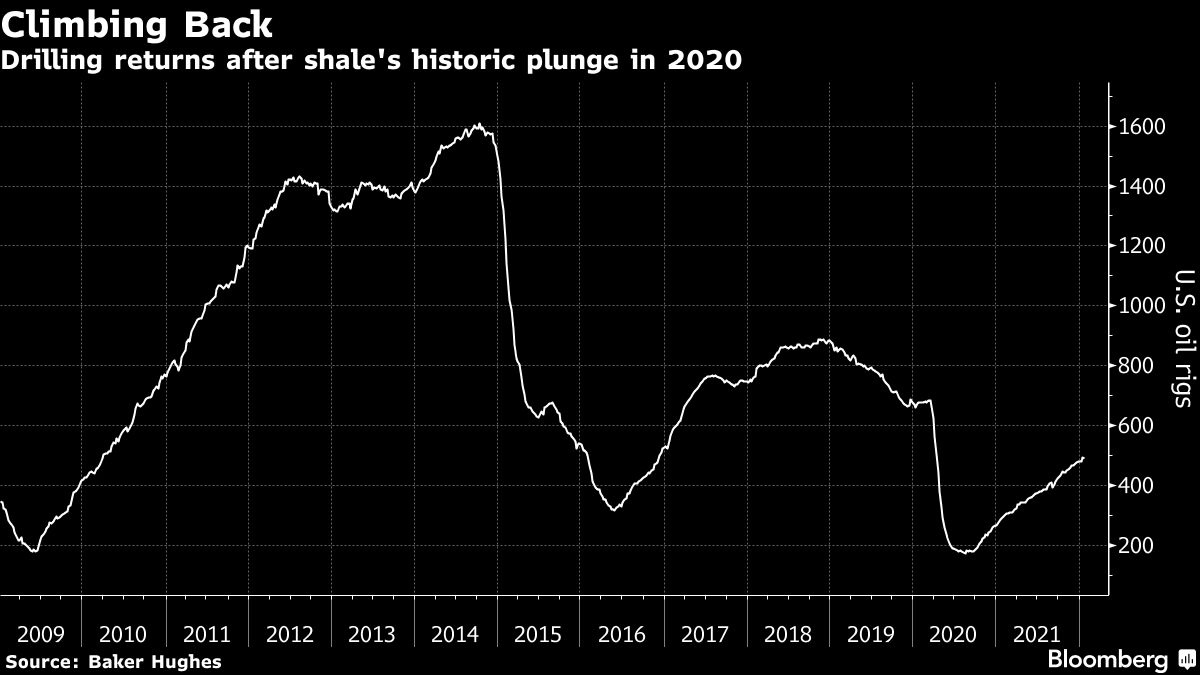 Halliburton joined larger rivals Schlumberger and Baker Hughes Co. in predicting a new multi-year expansion cycle for oilfield contractors, although Halliburton was the only one among the trio to boost shareholder payouts. The stock dropped 1.4 per cent to US$27.15 at 11:03 a.m. in New York amid a broader equity-market slide stemming from geopolitical tensions in Eastern Europe.

Schlumberger said last week it’s boosting spending as much as 18 per cent to US$2 billion to gear up for the several years of growth it expects from clients around the world.

As the biggest oilfield contractor in the U.S. and Canada, Halliburton stands to gain the most from a spending recovery that’s led by North America, which larger rival Schlumberger said last week should grow by at least 20 per cent.

Baker Hughes is also seeing waves of growth thanks to a revival in U.S. shale drilling. The Houston-based company last week posted orders that were up 28 per cent, led by the business line that cranks out massive turbines used to liquefy natural gas for export.

“The near-tripling of the dividend reflects confidence in the sustainability of the oilfield industry recovery, coming about two quarters earlier than we expected. The 12-cent quarterly payout is 32 per cent of consensus 2022 free cash flow, implying possible upside in the outlook.”

Excluding one-time items, Halliburton reported fourth-quarter profit of 36 cents a share, 2 cents more than the average estimate among analysts in a Bloomberg survey.

The dividend hike to 12 cents a share was the company’s first payout increase since late 2014, when crude prices were tumbling from more than US$100 a barrel earlier in the year.

On a sequential basis, sales in the final three months of 2021 jumped by double digits in North America and overseas, respectively. The biggest revenue surprise came from the Middle East and Asia, where sales exceeded estimates by 8 per cent.