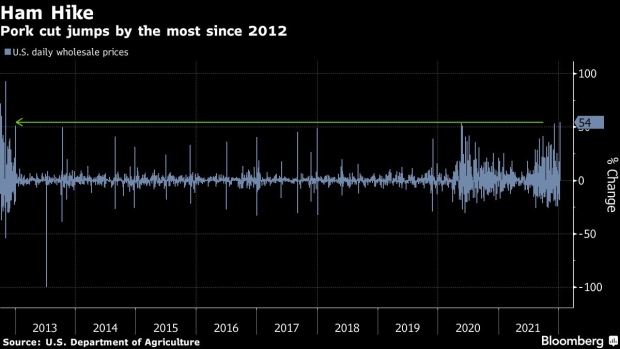 (Bloomberg) -- Want to buy a ham? You better bring home the bacon.

Prices for pork hams spiked 54% on Thursday, the biggest one-day rise since October 2012, U.S. Department of Agriculture data show. Although prices themselves aren’t at all-time highs -- pork prices fluctuate seasonally based on demand -- they’re the highest for this time of year in at least a decade.

The sharp one-day rise in ham prices comes as the omicron variant keeps workers out of U.S. slaughterhouses, hitting meat production. Absenteeism at meat plants has roughly doubled in recent days. Impacting ham specifically is the fact that skilled knife workers are needed to slice ham off the bone; some of those workers have been redeployed elsewhere in meat plants to maintain operations with fewer overall employees.

Meat companies and unions say high levels of vaccination rates among workers should prevent a repeat of the disaster that shut down plants and cleared stores of meat during the initial outbreak in 2020. But price gains this week are nonetheless stoking concerns of persistent inflation in meat, which has been a major contributor to food inflation.

Higher ham prices are also boosting hog futures, which climbed as much as 3.2% in Chicago Friday.