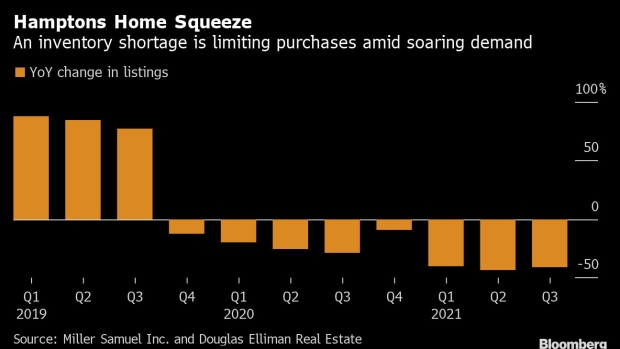 Homes stand in an aerial photograph taken over Southampton, New York, U.S., on Tuesday, Aug. 27, 2019. Would-be buyers in the Hamptons, the beachfront playground for New York City's well-heeled, have been treading cautiously, stymied by everything from tax changes to the vagaries of Wall Street employment and compensation. Photographer: Johnny Milano/Bloomberg , Bloomberg

(Bloomberg) -- Homebuyers clamoring to own property in the Hamptons are coming away empty.

Just 397 homes traded hands in the Long Island resort towns in the third quarter, down 35% from a year earlier, according to a report Thursday by appraiser Miller Samuel Inc. and brokerage Douglas Elliman Real Estate.

Demand was as hot as ever. There just wasn’t enough inventory to meet it. Listings tumbled 41% from the third quarter of 2020. It was the second-largest drop in the firm’s records, which date back to 2007, and the eighth straight quarter with a year-over-year decline.

The pandemic has turned the Hamptons from a summer vacation retreat to a year-round destination for buyers seeking space and an escape from the bustle of New York City. That’s left few homes on the market and pushed up prices for what is available.

Properties that found buyers in the quarter were listed for an average of just 96 days, the shortest duration in records dating to 2006, according to the report.

That meant buyers had to act fast. And to land a deal, many were willing to overpay: About 27% of purchases that closed in the quarter were above the asking price, the highest share in data going back to 2016.

The Hamptons are “abuzz this time of year, that’s never a thing,” said Todd Bourgard, who oversees sales in the Hamptons for Douglas Elliman. The area is beginning to feel like a year-round community, he said, and home shoppers ranging from their 30s to 50s want to create more space for their families.

“We have the buyers out here,” Bourgard said. “If we had the inventory, we’d certainly have more sales.”