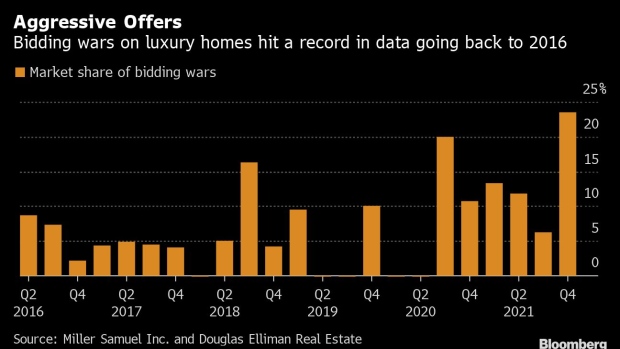 Homes stand along the ocean in an aerial photograph taken over Southampton, New York, U.S., on Tuesday, Aug. 27, 2019. Would-be buyers in the Hamptons, the beachfront playground for New York City's well-heeled, have been treading cautiously, stymied by everything from tax changes to the vagaries of Wall Street employment and compensation. , Bloomberg

(Bloomberg) -- The opulent seaside retreats of New York’s Hamptons have lured buyers from across the globe at a time when work-from-anywhere has gone mainstream. Their deals are stripping the market clean.

In the fourth quarter, sales of luxury homes -- the top 10% of all transactions -- dropped by a third from a year earlier, according to a report Thursday by appraiser Miller Samuel Inc. and brokerage Douglas Elliman Real Estate. It’s not because demand had abated, there was just too little to buy.

Before the pandemic, inventory was abundant: In the third quarter of 2019, the area had 1,100 high-end listings. At the end of last year, there were just 282, the firms said.

Price tags reflected the squeeze. The 54 luxury homes that changed hands in the quarter sold for a median of $8.05 million, near the record high and up 34% from a year earlier. An unprecedented 24% of those deals saw bidding wars.

The Covid-era hunt for space has jolted the previously sluggish luxury market in the Hamptons. Wealthy buyers, many sitting on bulging stock portfolios and unscathed by the pandemic, are competing for the best properties, draining the area’s supply of high-tier listings.

Even if the inventory doubled, it still wouldn’t come close to satisfying the demand, according to Jonathan Miller, president of Miller Samuel.

“Supply is going to take quite a while to catch up,” he said.

While lavish Hamptons homes have long been associated with Wall Street’s elite, the area is seeing an infusion of interest from buyers from the West Coast, Florida and Europe, and from the remote-work-friendly technology sector, according to Lori Schiaffino, an agent at Compass.

Deals included purchases of $50 million-plus oceanfront estates that had been owned by families for generations and entered the market for the first time, Schiaffino said.