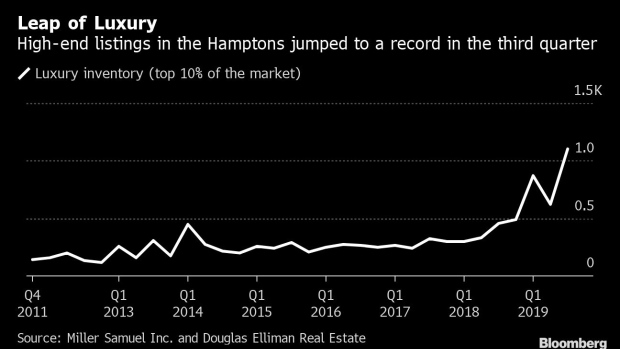 (Bloomberg) -- Luxury home listings in the Hamptons jumped to a record in the third quarter -- and that’s only part of the story of how few takers there have been for the priciest properties in the Long Island beachfront towns.

The supply of 1,100 high-end homes for sale at the end of September was the largest in data going back to 2011, and more than double the total for any quarter before this year, according to a report Thursday by appraiser Miller Samuel Inc. and brokerage Douglas Elliman Real Estate.

The Hamptons have fallen victim to the same concerns over high carrying costs and declining property values that are depressing sales in Manhattan, where many of the resort towns’ would-be buyers live. Federal tax changes that limit write-offs for local levies to $10,000 and buyers’ refusal to overpay in a softening market have put discretionary vacation-home purchases on hold across all price ranges. Sales in the Hamptons totaled 402 in the third quarter, down 15% from a year earlier and the fewest for the period since 2011, the firms said.

The luxury market -- the top 10%, which in the quarter meant homes costing $2.63 million or more -- was hit even harder. Purchases also fell 15%, but inventory in the category more than doubled from a year earlier. At the end of September, luxury listings accounted for 43% of all homes for sale in the Hamptons, Miller said. The quarterly average since 2011 is 19%.

On the ultra-high end, deals for at least $5 million dropped to the fewest in more than six years, with just 11 such properties finding buyers.

Todd Bourgard, who oversees home sales in the Hamptons for Douglas Elliman, said the slowdown in higher-end deals is a matter of simple overpricing -- owners getting too ambitious at a time when buyers have choices.

To contact the editors responsible for this story: Craig Giammona at cgiammona@bloomberg.net, Christine Maurus, Rob Urban